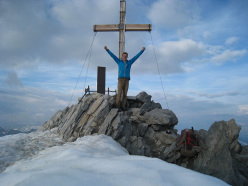 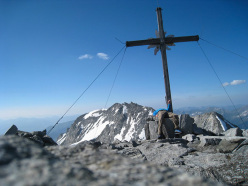 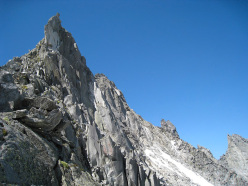 In July Jorg Verhoeven carried out the traverse of the Zillertaler Hauptkamm in Austria. An unusual week of alpinism in the busy schedule of a great sport climbing champion.

We were caught off-guard by Jorg Verhoeven, the talented Dutch climber who in mid-June "conceded" himself the traverse of the Zillertaler Hauptkamm, the main alpine ridge above Austria's Zillertal Alps which at circa 50km in length spans more than 20 peaks that range between 3000m and 3500m. Verhoeven surprised us, because he is known above all as a leading competition athlete - in 2008 he won the Lead World Cup while a fortnight ago he won bronze in the European Lead Championship - and although in the meantime we've seen him head to the mountains every now and then, we certainly hadn't expected a 7 day solo undertaking. Nothing extraordinary, as he is the first to point out, simply a great adventure which, perhaps, will lead him more and more towards the world's biggest faces.

Jorg, tell us about this traverse
I did this tour just after the European Championships. In fact I had planned to do after the World Cup in Briançon, but didn't feel fit enough for lead comps so I stayed at home and trained. Despite winning bronze I didn't enjoy Chamonix as I should have, perhaps in the past I've just done too many lead climbing competitions and in the future I'll concentrate more on bouldering competitions. And I'll also change a little.

Doing things like the traverse
Yes. I drove home the next day, got my stuff together and used the good weather spell. I only had three days to get to the Schwarzensteinerhütte, one day too little before the storm came. Hence I had to bail on a tough section around the Floitenspitzen, and crossed the glacier beneath the ridge line. After a short recovery (I was really broke from those 3 days) I made a run for the second part of the ridge and made it to the Hochfeiler in two long days (12+ hours each). The next day I stumbled home, and I've basically been resting ever since.

A great experience..
Yes, I've never been so tired in my life. I certainly didn't eat enough during that week and although I've restarted my bouldering training now, I hope that my body will recover.

So why did you decide to do this?
Good question! Originally I wanted to do the famous Floitenkamm, another ridge much shorter but very beautiful, too. Then I thought that the ultimate goal would be to do the main ridge of the Zillertaler mountain chain, from the Salzburg border all the way to Valle di Vizze. I planned a lot since getting this idea and spent many an evening over the map, calculating.

What was the biggest problem?
When! Because of the busy competition schedule it was hard to find a week during which I could not train at all, and of course the weather had to play along. The huge amounts of late winter snow troubled me as well, but in the end this didn't prove to be a problem at all.

Tell us about what motivates you
My motivation is a combination of my hunger for adventure and my love for the Zillertal mountains. I wanted to do something that would not only challenge me, but would also be incalculable. I think that is true adventure. It doesn't always have to be far from home, sometimes it lies just around the corner.

What did you know beforehand?
Not much. I didn't know how hard the ridge climbing would be, I had no idea how long I could walk with a 15kg rucksack (I had very little training) and I really didn't know how long it would take me. My calculations before setting off felt pretty decent, but were often very wrong. Every surprise was accompanied by a feeling of desperation and there were many moments when I thought of bailing and returning home.

How would you rate this week in the mountains?
The completion of this ridge is not a great alpine achievement, at least compared to many expeditions and climbs on 'big mountains', like the one my friends Hansjörg Auer, his brother Matthias and Simon Anthamatten have just returned from. But for me it was exactly what I was looking for, maybe even a bit too much... ;)