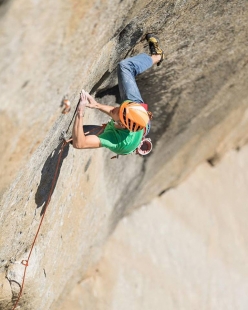 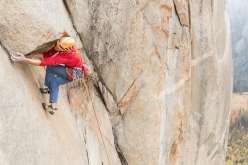 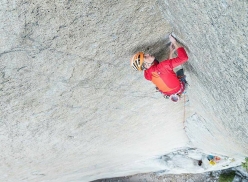 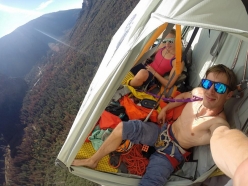 Interview with Dutch climber Jorg Verhoeven after the second free ascent of Dihedral Wall, the difficult big wall climb freed in 2004 by Tommy Caldwell on El Capitan in Yosemite, USA.

"Climbing The Nose is a piece of cake compared to the Dihedral Wall…" These words, uttered by Jorg Verhoeven, immediately help comprehend what the Dutchman climbed over a five-day period in mid-November when, together with his wife Katharina Saurwein, he made the second free ascent of the Dihedral Wall on El Capitan in Yosemite. After the first ascent in 1962 by Americans Ed Cooper, Jim Baldwin and Glen Denny, this climb to the left of the Nose was first climbed free in 2004 by Tommy Caldwell and at the time it was considered the hardest big wall free climb in the valley. In the meantime things have changed a bit and this 'record' is currently held by Dawn Wall, but the difficulties on Dihedral Wall remain formidable, as Verhoeven found out for himself this autumn.

Jorg, of all the routes on El Capitan, why did you chose Dihedral Wall?
After my free ascent of The Nose in 2014 I was looking for a new challenge this year and wanted more El Cap action. The incredible line of the Dawn Wall had of course taunted me but due to long-lasting finger injuries this year I didn't feel confident enough. So I chose between two routes with similar difficulty (5.14a); Dihedral Wall and Magic Mushroom. Since Magic Mushroom has the hard pitches very high up on the wall, and since Katha would be coming along and would have projects of her own, it made more sense to go for Dihedral Wall which is more workable from the ground. As a backup I had the option of trying the more slabby Lurking Fear, but my fingers felt better then expected.

You started working it three weeks ago. What did you expect and what did you find?
Tommy wrote a pretty detailed trip report about Dihedral Wall, which gave me a lot of information (and the shudders) about the style of climbing and the stacked hard pitches. I'd heard from aid climbers that the route isn't very popular, despite being a major classic, and this is maybe due to the many hanging belays. I found that most of the climbing was harder than expected and also less steep. The first 16 pitches are all quite hard with pitches 6 - 16 all from 8a to 8b+. These days these grades are not very scary, but I quickly found out that Tommy has a rating system which is a little different than on routes like El Nino. Some 5.13c felt harder then for examplte the Great Roof pitch on The Nose (given 5.13d and in similar style and length) and even the 5.12+ pitches needed biting down on.

Your first push ground to a halt…
The first crux is a long and very technical 5.14a pitch, which felt like a sport 8c to me. It is both powerful and technical, with several cruxes high up. This pitch shut me down on the first push, so I decided to work it some more and go down to the valley.

Then on your successful push you climbed that first crux on day 2. Was the rest a mere formality?
My first go on this pitch was similar to the last push, falling at the end. The sun hits the wall early in the morning, so I didn't have much time for another try. Minuscule changes on the passage where I had fallen proved important and got me to the top. But the real battle had only just begun.

You mentioned the sun. Tell us about conditions on the big stone. And are you into night climbing, too?
No, I chose to climb in the morning since at night I wasn't able to see the pinscars (that result from the aid climbing, Editor's Note) and tiny feet well enough. On Zodiac or Dawn Wall the wall heats up first thing in the morning so this leaves you only with the option of climbing by night, when the rock has cooled down. I had a couple of hours in the morning and then spent the rest of the day either on the portaledge or working the rest of the pitches in the sun.

Five days on the wall, of which day 5 in particular sounds like tough work since you spent 20 hours climbing non-stop to the summit of El Capitan…
I didn't have time for a rest day, and with my limited pre-work I had never tried some hard pitches higher up. I fell many times on different pitches, so it was a 5-day battle to get the 16 pitches all free. On day 5 I climbed the remaining three 5.13c's and we spent the entire night summiting, making it a 20+ hour day by itself. Both Katha and I were utterly destroyed. My hands and feet were swollen, we had 2 bars and 2 liters of water for 20 hours of climbing. This day in itself has changed me a lot, and showed me clearly where my limits lie.

Tommy freed this 12 years ago. It has had no repeats since then and it seems to have fallen into a sort of oblivion...
This route is a beast. I would suggest: 5.14a/b, two 5.13d, three 5.13c, three 5.13b and 6 pitches 5.12+, out of which a 5.12+ off width (think about the feared Monster offwidth pitch on on Salathé Wall, which is given 5.11a). The stack of hard climbing is incredible and all pitches are long (no one movers). The climbing itself is all on a left-facing, rounded and pin scarred dihedral, except for four slabby pitches which constitute the cruxes. Climbing The Nose is a piece of cake compared to the Dihedral Wall, although you have to try it to realize this. And the hanging belays (18 out of 20) don't help...

So it's Dawn Wall next…
That's what I thought as well, but for now: no. Dihedral Wall kind of took it all out of me, the battle was a notch too intense. I'd much rather appreciate being active on El Cap's more 'moderate' routes I haven't done yet: Salathé, El Corazon, Muir, Zodiac etc. But let's see what the future brings. Now all I can do is hope my hands swell down and I can feel like a living person again soon :)


RELATED NEWS
14/11/2016 - Jorg Verhoeven claims first repeat of Dihedral Wall in Yosemite
After 5 days of climbing Jorg Verhoeven has now carried out the first repeat of 'Dihedral Wall' on El Capitan in Yosemite. Until this repeat, carried out together with his wife Katharina Saurwein, the route had only been free climbed once before, namely by Tommy Caldwell who in 2004 established what was then considered the most difficult big wall climb in the Yosemite Valley.