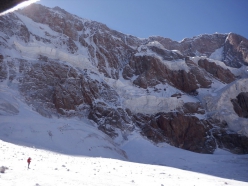 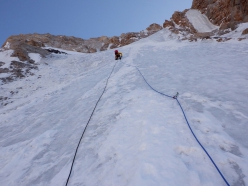 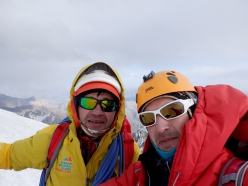 Ace Russian mountaineers Alexander Gukov and Victor Koval have completed an impressive first ascent in the Kokshaal-Too Ridge mountain range, climbing a direct line up the center of the north face of Peak Kosmos in pure alpine style over a period of 7 days.

Alexander Gukov and Victor Koval travelled to Kyrgyzstan towards the end of September and after acclimatising en route on Uchitel Peak 4500m, they made their way to the base of Peak Kosmos, noticing that the North Face was menacingly alive, with considerable ice fall from the seracs above.

The pair set off early on the 26th of September and managed to climb 500 meters, often simul-climbing, before settling in for a cold night out of harm’s way below an overhanging wall of rock at 4600m. The next day they climbed steep ice and managed to make it to their planned bivouac spot at 5060m and barely managed to erect their small two-man tent.

They continued up early the next morning, keen to make use of the mere 10 hours of daylight at their disposal. The route steepened sharply and after only 400 vertical meters they spent two hours chopping a platform for their third bivy which proved even more uncomfortable than usual due to spindrift.

After warming up the next morning they climbed more ice until they reached the steep snow slopes that led, after 4 days, past the looming cornices off the face and onto the knife-edge summit ridge. Here, at an altitude of 5820m, they bivied once again, perched on the exposed south face, overlooking China and just out of reach of the winds that started to pick up at dusk.

Contrary to forecast, the wind intensified and after a second consecutive sleepless night they rapidly packed their rucksack and headed towards the, past extremely complex terrain, often front-toothing above the 2km drop; Gukov and Koval reached the 5942m high summit at 17:00 and, after the ritual photos, headed immediately down the East Ridge.

After abseiling more than 600m into the darkness they finally found a safe place to bivouac, but they could not rest for long as they needed to get off the high altitude plateau exposed to the seracs. The pair spent the entire day searching for a safe descent and as darkness set in made their last bivoac.

The next day, having finished all they food, they continued down, once again past complicated and dangerous terrain, yet managed to get safely off the mountain just as "weather window slams shut and winter sets in."

The climb is graded 6B, the maximum on the Russian grading scale, and is the first to reach the summit of Peak Kosmos, also referred to as Peak Schmidt.