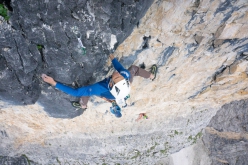 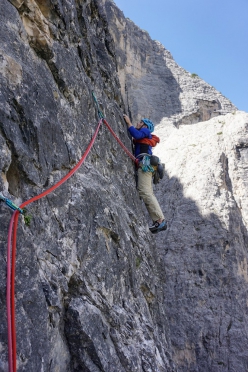 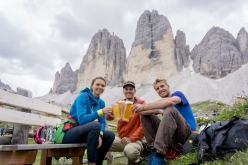 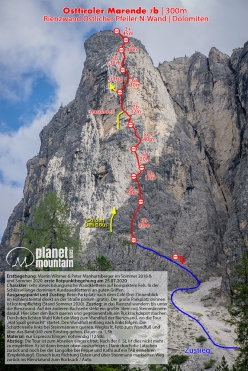 On the east pillar of Rienzwand in Rienztal (Höhlensteintal, Dolomites) Peter Manhartsberger and Martin Wibmer have established Osttiroler Marende, a new alpine sports climb graded 7b.

Between the summers of 2018 and 2020 Peter Manhartsberger and Martin Wibmer made the first ascent of Osttiroler Marende, a new multi-pitch rock climb up the east pillar of Rienzwand, also referred to as Col di Mezzo, in the Rienztal below the Tre Cime di Lavaredo in the Dolomites. Manhartsberger had spied the line years earlier while repeating the alpine sports climb  Hat Spaß gemacht, established by the Sexten mountain guide Hannes Pfeifhofer.

In 2018 the two Austrians invested two days climbing the first five pitches, and while establishing the crux they noticed a project that climbed the only section of good rock; they shared this, before descending due to a storm.  In 2020 the two returned and completed the crux pitch, graded 7b, and continued to the summit. On 25 July they returned with Sabrina Ornter and made the first free ascent. Apart from the last two pitches, Osttiroler Marende provides excellent rock and varied climbing up to 7b.

After having completed the line Manhartsberger discovered that the project which shares one pitch with his route is called Golden Delicious and was started a few years ago by local mountain guide Josef Hilpold. With his consent they added a bolt to the crux pitch to render it less runout.

24.06.2020
Wolkenreise, a journey through the clouds in the Dolomites
Enrico Maioni, Cortina Mountain Guide, introduces Wolkenreise, a multi-pitch alpine sports climb Pilastro di Misurina in the Cadini Group of the Italian Dolomites, first ascended in 2017 by Peter Manhartsberger and Stefan Kopeinig and dedicated to Florian Thamer.