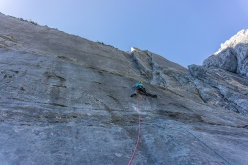 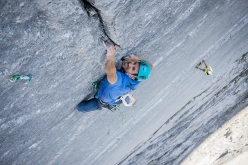 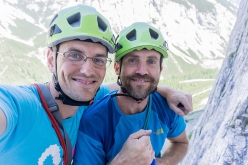 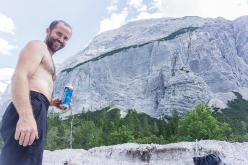 On Repswand in the Karwendel massif, Austria, Peter Manhartsberger and Klaus Gössinger have made the first ascent of the new multi-pitch alpine sports climb Prime Time.

Some of the first to leave their mark on this north-facing wall were Heinz Zak and Georg Walch who established a series of trad climbs here in the late 1980’s, but these soon fell into disuse and despite its vicinity to the Tyrolean capital, the cliff saw relatively little action. Reinhold Scherer and Dieter Stöhr made the approach in 2008 to establish some new routes including the classic Single Trail, and although further climbs were added in the ensuing years, the central slab remained untouched.

In summer 2019 Manhartsberger and Gössinger decided to tackle the central slab head on; choosing a line immediately to the right of Bike 2 Crack, they spent three days forging the route ground-up. Due to the difficulties on the crux pitch they decided to bolt an easier variation by abseil, however winter set in prior to their first redpoint attempt.

With Gössinger out of action due to a knee operation, Manhartsberger returned earlier this July with Catherine Laflamme, Armin Fuchs and Oliver Rohrmoser and managed to free all the pitches except for the hardest two, which he estimates at 7c+/8a and 8b/+ respectively. The first free ascent is outstanding and Manhartsberger has declared the line an open project. Future ascensionists should note that the rock quality and the climbing are “sensational”, hence the name, Prime Time.

Repswand approach
From Innsbruck drive north to Scharnitz. Park at the Schraffelbrücke car park. Continue by bike for approx. 45min - 1 hour into the valley towards Kastenalm (13km). Circa 100m before reaching the Kastenalm car park head left at the gate and continue for a further 5 minutes to below the wall. Leave the bikes here and follow cairns to reach the base of the crag in 10 minutes. E-Mountainbikes make the approach considerably easier.

24.06.2020
Wolkenreise, a journey through the clouds in the Dolomites
Enrico Maioni, Cortina Mountain Guide, introduces Wolkenreise, a multi-pitch alpine sports climb Pilastro di Misurina in the Cadini Group of the Italian Dolomites, first ascended in 2017 by Peter Manhartsberger and Stefan Kopeinig and dedicated to Florian Thamer.