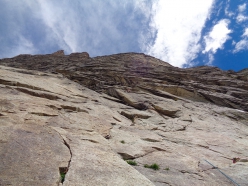 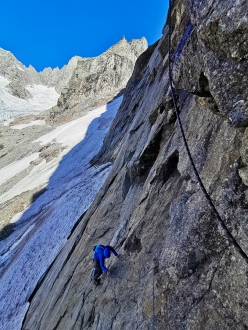 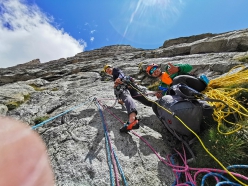 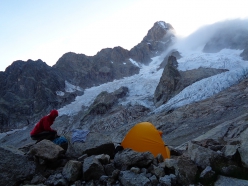 Camillo Bussolati reports about the first ascent of Lloverà y yo verè, a new rock climb up the west face of Petit Mont Greuvetta in the Mont Blanc massif, established in summer 2019 with Matteo Castellini and Francesco Crescini.

At the end of summer 2016 Matteo Castellini and I repeated the Bonatti - Mazeaud, established by Walter Bonatti and Pierre Mazeaud up the south face of the Petit Jorasses. The ambient in the Freboudze basin was spectacular, providing splendid views onto the impressive east face of the Grandes Jorasses. It is a corner of Mont Blanc which is distant from the cable cars and tourists, where breathing the fresh air of adventure is still possible.

Back from the Bonatti we took a look at Petit Mont Greuvetta. The west face is both vast and steep and the only climbs we knew of were Dromi and Barthassat. Hence the idea of going to check it out.

In July the following year we headed towards the mountain equipped with gear for establishing a new route and, much to our surprise, we discovered some excavated terraces: Alexis Paradise, the tiny corner of Mont Blanc that the famous French mountaineer Patrick Gabarrou dedicated to his friend and long-term climbing partner Alexis Long who died in Val Ferret back in 1992.

We had the honour of talking on the phone with Pat Gab who informed us about the routes he and his friends had established there and others they were in the process of completing. He also offered us use of his tent, proving to be enthusiastic and generous.

The line we chose alternates slabs and roofs and is located between Dromi, on the left, and a project (yellow fixed rope) on the right. Once we reached a large roof 180 meters from the base we decided to finish our route and set up the rappels, in order to avoid joining one of the two nearby climbs or tackling the roof.

The climbing is varied but predominantly up slabs. We bolted ground-up, avoiding placing bolts where natural pro could be placed. Although the route is well protected, in some places reaching the next bolt isn't trivial. The overall level of commitment is not too high though: you can climb the route in half a day, as an intermediate stop-off as you climb up to the Gervasutti bivouac and as an excellent warm-up for the beautiful slabs onPetit Jorasses.

Unstable weather accompanied us throughout the first ascent, hence the name Lloverà y yo verè, "It'll rain and we'll see".