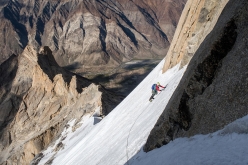 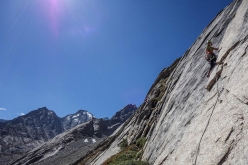 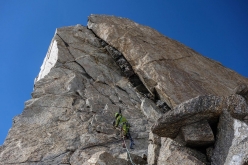 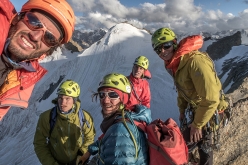 Michi Groher, Thomas Holler, Timo Moser, Barbara Vigl and Lorin Etzel at the end of day 1 during their ascent of Cerro Zanskar
Photo by Naturfreunde

The Austrian Alpine Club cadet team 'Naturfreunde' celebrated the end of the 2015-2017 triennial with a successful mountaineering expedition to the Zanskar region in India that results in new climbs in the Indian Himalaya.

The main aim of the team composed by Michael Groher, Thomas Holler, Lorin Etzel, Timo Moser and Barbara Vigl was to climb two virgin summits nicknamed Zanskar Matterhorn and Zanskar Badile for their striking resemblance with the famous mountains in the Alps.

At the start of August, the expedition arrived at Padum in Northern India, ready to make the four-day approach trek across the Poat La Pass 5500m. Unfortunately for logistical reasons - not even half of the required porters turned up - the expedition was forced to abandon its main objective and therefore opted for Plan B: a "stunning granite monolith" they quickly dubbed Zanskar Cerro Torre they had sighted just 30 minutes from Padum, above the village of Sani.

After acclimatising Holler and Vigl made the first ascent of Inshallah maybe (400m, M6, 5c, 60°) up the pillar in front of the North face of the Cerro, while Etzel, Groher and Moser climbed North-Eastface (1000 m,55°, 4a), a new route up a 6080 m summit on the righthand side of the valley.

After a short rest, a new route was established over two days through the SW Face of the Cerro. In its 500 meters Dust. From dusk till dawn breaches difficulties up to 6a, A1 past excellent granite and via a series of cracks, chimneys and corners. According to the locals the summit had never been reached before but the expedition found a new sling on the mountain and would therefore be interested to finding out who climbed there before them.

With seven days left the group then moved to a peak that, back at home, they discovered is called Shafat Fortress Wall and had already been ascended in the past. Holler and Moser reached the summit of Fortress peak in two days via one bivouac at 5600 m and after having climbed the obvious ice gully. Etzel, Groher and Vigl spent two days climbing the amazing pillar on the opposite side of the camp via their My local river is a nightmare (500 m, 18 pitches, 6a+).