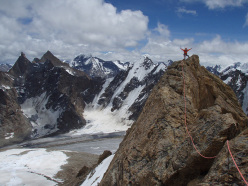 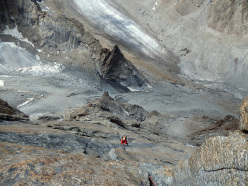 Looking down the west face of Kun Long Ri.
Photo by Anastasija Davidova 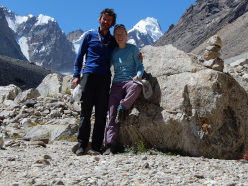 Between 20 July and 9 September 2015 the Slovenian alpinists Anastasija Davidova and Matija Jošt - Matic made what are believed to be the first ascents of three previously unclimbed peaks in the India’s Raru valley: Khumchu Ri 6064m, Kun Long Ri 6058m and Ri Pok Te 6210m.

Last summer the Slovenes Anastasija Davidova and Matija Jošt - Matic travelled to the rarely visited Zanskar region of India's Himalaya where they spent 35 days exploring the westernmost valley of Tetleh Nala, an area that had only been visited once previously by western teams, namely the 2011 British Imperial College expedition.

Together with Chetan Pandey (liaison officer) and Heera Singh (cook), Davidova and Jost - Matic established BC at 4623m on 29 July after trekking for two days from Raru, and then acclimatised by trekking further up the valley during the following days. On 5 August they climbed Khumchu Ri via its SE Ridge in 13 hours from their bivy at 5549m. Although this mountain served as an acclimatisation climb, the Slovene’s believe theirs might well be the first ascent of this 6064m peak.

Bad weather set in but on 13 August the duo trekked back up Tetleh Nala towards an unclimbed mountain on the west side of the valley to bivy at 5533m. The next two days were spent climbing the mountain's West Face, and on 16 August they successfully reached the 6058m summit of Kun Long Ri via their route Happy Journey (TD+, 1500m), before descending to Base Camp on the 17th.

Davidova experienced toothache and had to travel to Padum to see a dentist, but on her return there was still enough time to attempt one final objective: the East Face of Ri Pok Te. After a false start on 24 August due to poor weather, on 25 August Davidova and Jošt set off once again towards the mountain's eastern slopes, following the line initially chosen by the British mountaineers Prinold and Scott. After a bivouac at 5920m they continued easily to reach the 6210m summit in fine weather at 15:30 on the 26th, before descending down the line of ascent to reach base camp on the 27th of August. They named their route From East to West, have graded it TD+/ED-, VI-, 1200m and believe "the beauty of its climbing is five stars". This marked the end of their alpine exploration and at the start of September they began their return to civilisation.

Writing after their expedition, Davidova and Jošt - Matic  concluded: "The mountains above Tetleh Nala and valley itself are great. The upper part of the valley is very rarely visited even by locals and therefore nature is pretty much unspoiled and fragile. For our climbing pleasures we had chosen such objectives that fit our skills and other circumstances. It means that we managed to climb in simple (alpine) style. Mostly we used nuts and friends for protection, we hammered in few pitons, and only one of them pollutes face of Ri Pok Te, we use it for abseil. We also left some 25 rappell slings, some of them with carabineers that now "decorate" slopes of Kun Long Ri and Ri Pok Te. When we left the valley we did our best to clean the base camp."

NASTJA DAVIDOVA
Nastja Davidova (36), alpinist, physiotherapist from Ljubljana, climbing instructor and employed by the Slovenian army as a top athlete. For her climbs in 2011, 2013 and 2014 she was declared best Slovenian female alpinist. For the last six years she was also received the award for the best woman alpinist of Ljubljana, her home town. Davidova has taken part in nine expeditions and climbing trips to Patagonia, USA, Kyrgyzstan, Nepal, Alaska, India Himalaya, three of them in all female team, always climbing, exploring and repeating difficult climbs.