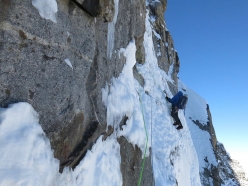 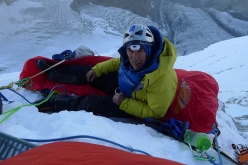 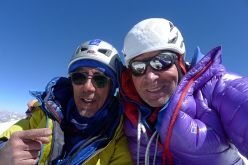 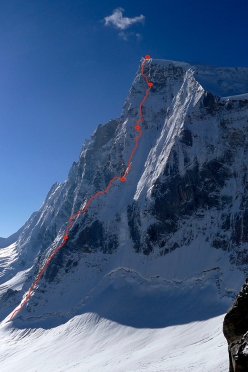 The details and photos of the first ascent of Sersank Peak (6100m) in the Indian Himalaya, carried out by British alpinists Mick Fowler and Victor Saunders in alpine style over eight days.

As previously reported, during an 8 day round trip British mountaineers Mick Fowler and Victor Saunders successfully ascended the hitherto unclimbed North Buttress of Sersank Peak (Shib Shankar), the 6100m high mountain in the Indian Himalayas. Details have now emerged about this climb which happens to be the first ascent of the entire mountain, as in 2008 the Japanese mountaineers Kazuo Kozu, Hidetaka Lizuka and Reiko Maruyam, climbing from the west, are reported to have stopped 40m short of the summit in respect for the religious concerns of the local people. Prior to their ascent Fowler and Saunders asked the locals if they had any objection to them climbing to the summit and since they were happy for them to do so, when the opportunity arose the Brits proceeded to the mountain’s highest point.

Fowler and Saunders acclimatized carefully and accessed the mountain using a difficult and rarely used 5,000m pass of the Sersank La and descended the far side to the foot of the north face. The climb itself took five days, during an eight day round trip from base camp.

Fowler stated: "Heavy snowfall on dry cold rock made for challenging conditions. For two days we swept away snow and inched up the disturbingly blank rock below. By the end of the second day a lower buttress and sharp crest had been overcome and we were firmly established on the cold confines of the north face proper. Here the conditions were better but it became clear that Victor's body was unable to process our dehydrated food, but such minor problems are nothing to a man of Victor's stature.

Day four was the crux day - fantastic white ice climbing with several pitches just within our limits. Even with numerous unplanned halts, superlatives abounded as we ended the day lying on separate small ledges cut in the ice. Actually, Victor appeared to be more suspended in a web of rope than supported by a ledge, but such inconveniences are minor in the grand scheme of a Himalayan experience.

At 6.30pm on our fifth day on the face it fell to me to aid and cut through the cornice to emerge onto the south side. After another cold bivouac on narrow ice ledges, the previously unclimbed 150m summit block was dispatched and it was time to head down the complex glacier systems of the south and west face. Two days later we had abseiled through a never-ending icefall, stumbled down disturbingly steep loose rock and met with our cook and liaison officer, who brought us tea and biscuits."


British mountaineers Mick Fowler and Victor Saunders have successfully ascended the hitherto unclimbed North Face of Sersank Peak (Shib Shankar), a 6100m high mountain in the Indian Himalayas during an 8 day round trip.