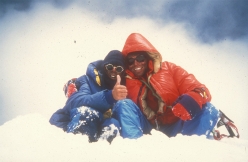 Victor Saunders (left) and Mick Fowler on the summit of Spantik in 1987 after having climbed the 2,000m Golden Pillar up the North West Face in alpine style over seven days in August 1987
Photo by archive Mick Fowler 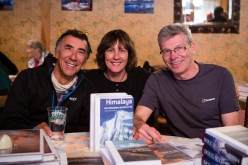 British mountaineers Mick Fowler and Victor Saunders have successfully ascended the hitherto unclimbed North Face of Sersank Peak (Shib Shankar), a 6100m high mountain in the Indian Himalayas during an 8 day round trip.

Almost 30 years after they last climbed together, this autumn British mountaineers Mick Fowler and Vic Saunders joined forces to make the first ascent of the 1100m high north buttress of Sersank, a remote 6100m mountain in the Himachal Pradesh region of India. Writing yesterday from the town Manali after the climb, Fowler sent the following concise confirmation “Sersank ticked. Five days to climb the north buttress and an eight day round trip from base camp. Absolutely brilliant.”

According to our initial research Sersank Peak - also referred to as Shib Shankar - is reported to have been attempted in 2007 by a British expedition led by Chris Bonington, and then first climbed in 2008 by Japanese mountaineers Kazuo Kozu, Hidetaka Lizuka and Reiko Maruyam.

Fowler and Saunders were regular climbing partners in the late ’70’s and early 1980’s, leaving their marks both in the UK and in the Greater Ranges. In 1978 the duo made the first ascent of Shield Direct on Ben Nevis, a coveted winter climb in Scotland and the first to be graded VI in a Scottish guide book. After climbing together in the Himalaya, they last climbed together in 1987 in Pakistan, where they made the ground-breaking, seven-day alpine style first ascent of the 2000m high Golden Pillar of Spantik. Since then they have gone their separate ways, with Saunders working as a mountain guide based in Chamonix. Fowler’s regular trips to bigger mountains have resulted in numerous first ascents, of which Gave Ding, Shiva and Siguniang earned him three Piolet d’Or awards.

Fowler and Saunders are currently returning home and expected back in the UK on the 14th of October, when more details about their ascent will be known. In the meantime, if you haven’t already seen the footage, we recommend you watch the video part of the journey that took them along the roads of the Rhotang Pass, hailed as some of the most dangerous in the world.