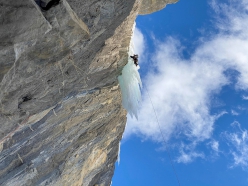 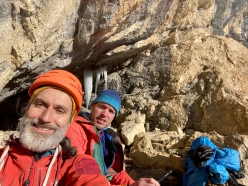 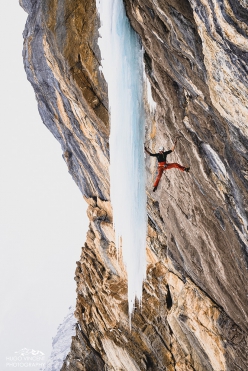 Jeff Mercier making the first onsight ascent of Narsil at Breitwangflue, Kandersteg, Swtizerland, shortly after the first ascent carried out by Simon Chatelan and Nicolas Jaquet in January 2021
Photo by Hugo Vincent Photography 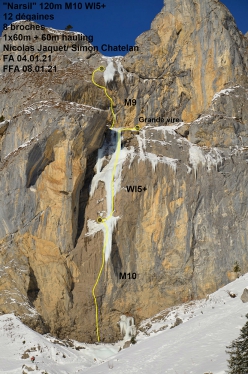 On the Breitwangfluh above Kandersteg in Switzerland Simon Chatelan and Nicolas Jaquet have established the mixed climb Narsil (M10 WI5+). Chatelan reports.

Narsil has surely caught the eye of many visiting climbers visiting, but given the fact that it faces the sun and that it's highly exposed to avalanches, it attracted people's attention more for the collapsing ice and rumbling avalanches than for a possible first ascent. The likelihood that all conditions necessary for a safe ascent coincide are therefore rare. But with the excellent conditions that accompanied the start of 2021, the unthinkable happened. Little snowfall, a long period of cold and not much sunshine greatly contributed in making this route a reality.

On 4 January 4 I returned to Breitwangflue with Nicolas Jaquet (a prolific local expert) with the idea of establishing this line formed by a two-pitch dagger and a third pitch, also breached up another pillar. Since the rock is not particularly featured, we decided to place some bolts. Pitch 1 climbs vertical rock, somewhat friable and difficult to read and then, after a good rest, the route kicks in proper. The rock improves but also becomes steeper and steeper. Finally, after 30m of "dry" we reached the ice on an enormous stalactite which hung 10m in the void.

The second pitch provided some interesting ice, that had suffered in the sun, but nevertheless the terrain remained classic. This led to large ledge which splits the climb in two; from here we could easily walk to the base of the third and final pitch. An interesting anecdote that could have had dramatic consequences: when we established the 1st pitch, the pillar on pitch 3 collapsed with a loud bang. It was only when we got to the big ledge that we realised, much to our amazement, that it had collapsed and that it could have fallen on us, had it not been for the huge ledge that thankfully protected us from most of the falling ice.

Nevertheless we decided to push on and establish pitch 3, even if in the end it didn't reach the hanging dagger. This 3rd pitch turned out to offer steeper sections than on pitch 1 but the rock was more "classic terrain", with good holds but also some ice blobs here and there. We exited by climbing to the left of the drip and finished more easily on the slabs (If the stalactite forms another 3m, it is surely possible to climb it.)

We returned on Friday 8 January, braving the extreme cold (-15 in the morning) to free the route. At 14:30, sitting comfortably in the sun on the large panoramic ledge, we could make out the many other parties climbing the various routes in the shade.

As to the name of the route, Narsil is the name of the sword in the Lords of the Rings trilogy that cut the One Ring from Sauron's hand. On a different note, on 12 January Jeff Mercier visited the area and onsighted the first M10 pitch after a 1.5 hour battle. Chapeau...