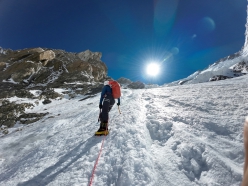 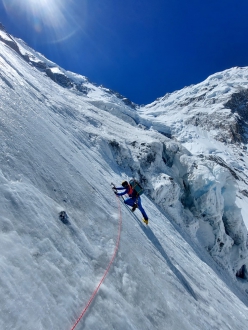 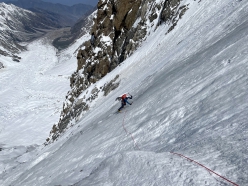 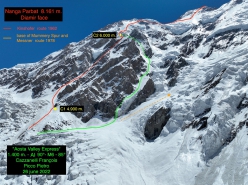 On the Diamir face of Nanga Parbat the Italian mountaineers François Cazzanelli and Pietro Picco have added a difficult new variation start to the Kinshofer route. Called Valle d'Aosta Express, the 1400m addition breaches difficulties up to AI 90° M6 85°, and was climbed on 26 June.

News just in from the north-west face of Nanga Parbat in Pakistan where on 26 June the Italian mountaineers François Cazzanelli and Pietro Picco climbed a line which, according to initial research, is a difficult new variation start to the Kinshofer route. After climbing independetly for 1400m it joins the line put up in 1962 by Toni Kinshofer, Sigi Löw and Anderl Mannhardt during the second ascent of the mountain, at Camp 2 and at an altitude of 6000 meters

Acclimatisation was carried out by attempting to climb the little known and unequipped Genalo Peak 6606m, reaching an altitude of 6100m before turning back, after which a week of bad weather forced climbers to stay put at base camp.

On Sunday Cazzanelli and Picco climbed the obvious serac that towers above the base of the Mummery Spur and the route climbed solo by Reinhold Messner in 1978 before tackling a
series of steep snowfields and mixed terrain to join the Kinshofer route. Here Cazzanelli and Picco met the other members of their expedition and descended together that same day to base camp.

Cazzanelli explained "This small but important addition for us was not possible without the help and support of our team members with whom we achieved this extraordinary result. Now we will rest for a few days and then we will resume work from where we left it! Stay tuned!"

01.08.2020
Mont Blanc Super Integrale de Peutèrey: François Cazzanelli, Francesco Ratti climb in the footsteps of Renato Casarotto
Mountain guides François Cazzanelli and Francesco Ratti have enchained the Ratti-Vitali route on Aiguille Noire de Peutèrey, the Gervasutti - Boccalatte route on Picco Gugliermina and the Central Pillar of Frêney, first climbed in 1961 by Chris Bonington, Ian Clough, Jan Duglosz, Don Whillans before proceeding to the summit of Mont Blanc. The so-called Super Integrale de Peutèrey, or Frêney trilogy, was climbed in 1982 by the great Italian mountaineer Renato Casarotto alone and in winter during an epic ascent that has gone down in the history of mountaineering as one of the all-time greatest climbs.