The impressive South Face of Denali with the immense Cassin ridge in the centre. First ascended from 6 - 19 July 1961 by the Italian Ragni di Lecco members Luigino Airoldi, Gigi Alippi, Jack Canali, Riccardo Cassin, Romano Perego and Annibale Zucchi, the elegant and challenging line is one of the most famous and sought-after alpine routes in the world.
Photo by Nicola Bonaiti 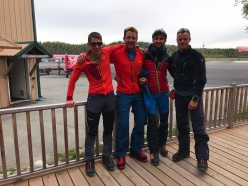 News flash from Alaska where in less than a week François Cazzanelli and Francesco Ratti have twice reached the summit of Denali, at 6190 meters the highest mountain in North America.

On an expedition with Stefano Stradelli and Roger Bovard, Cazzanelli and Ratti ascended the West Rib on Friday 24 May, requiring 9 hours from Camp 4 at 4000 meters to follow the 1800m ridge and reach the summit at 21.00.

On that occasion the weather window wasn’t long enough to attempt the famous Cassin Ridge, but on 29 May the two Valle d'Aosta mountain guides set off for this elegant ridge, first ascended in 1961 by a Ragni di Lecco expedition led by Riccardo Cassin. After departing at 7 am, Cazzanelli and Ratti reached the main summit at 7 am the next morning, commenting after the ascent "Not bad considering the not so easy conditions of this year, we are very happy"

The summit of Denali was reached by Stradelli and Bovard who, on their first international expedition, managed to top out on 29 May after ascending the West Rib.

The expedition will last until 14 June.

CASSIN RIDGE, DENALI
First ascended from 6 - 19 July 1961 by the Italian Ragni di Lecco members Luigino Airoldi, Gigi Alippi, Jack Canali, Riccardo Cassin, Romano Perego and Annibale Zucchi, the elegant and challenging line is one of the most famous and sought-after alpine routes in the world. After the ascent Cassin was congratulated via telegram by the President of the United States of America, John Kennedy. The route is graded Alaska Grade 5, 65°, 5.8 AI4, 9,000 feet and usually takes anywhere between 3 - 7 days.