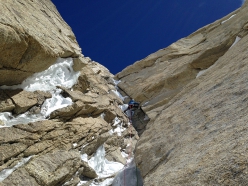 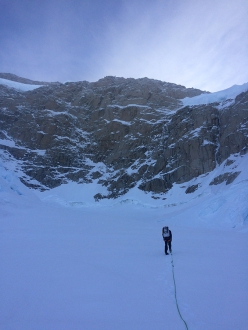 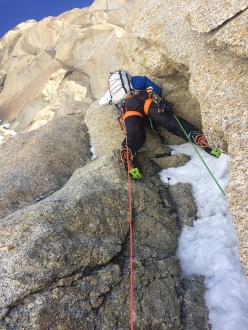 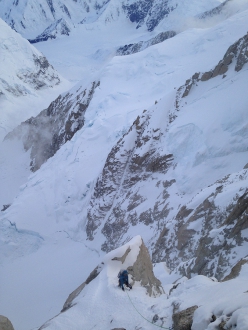 Sam Hennessy reports about the second ascent of Light Traveller, one of the most difficult climbs on Denali, Alaska, first ascended by Stephen Koch and Marko Prezelj in 2001 and repeated now, alpine style, together with Michael Gardner in a 36-hour push.

On June 4 and 5 Michael Gardner and I made the second ascent of Light Traveler (VI M7 WI6) on the 8500 ft SW Face of Denali. We started from "ski hill" camp at 7800' at 2:30 AM, and finished on the summit 36 hours later. Our total time schrund to summit was 31 hours, with the remaining 5 hours spent approaching via the NE Fork of the Kahiltna.

The route was established in 2001 by Stephen Koch and Marko Prezelj in a 51 hour push from 14200' camp on the west Buttress, and to our knowledge no one has given serious thought to repeating it since. In their report, they spoke of sustained difficult climbing all the way to the junction with the Cassin, extremely high quality rock, and "the hardest free pitch Marko had led in the mountains", which honestly was quite intimidating! Additionally they were so tired that they abandoned some of their gear at various points along the route. The quality sparked our interest, as well as the fact that the style could be improved upon. The adventure factor also seemed higher than other routes on the S and SW faces, as all we had to go on was a somewhat vague description in the 2002 American Alpine Journal.

We actually arrived in Alaska on April 19th, but due to persistent heavy snowfall we never even put our harnesses on until starting up the West Buttress on May 12. Both Michael and I work as guides, and our trips launched within days of each other. It was definitely nice to get paid to acclimatize! I had a strong team of fun clients, and we summited just a couple hours before Michael on May 28.

We flew back to Talkeetna on May 31, and after 2 days of rest and re-packing flew back on to the glacier on June 3. We skied to ski hill that morning, and had a good 12 hrs of rest before launching.

Our trip through the NE Fork was uneventful, and we crossed the schrund at around 7:30 on the 4th. The first several hundred feet are moderate, and we simul-climbed to the base of the first pitch. From the several photos we had we could tell that there was quite a bit less ice than the first ascent, but Michael figured it didn't look too bad so he launched up and cruised it. I took over for several more pitches of sustained hard climbing, then Michael did the "Shower" pitch, which had been soaking wet on the FA but we found to be dry and perhaps the most fun on the route.

After around 300m of sustained climbing we reached an ice band, and took advantage of the last four hours of sun to brew up, dry our feet, and eat some soup before pushing on into the night. I led through the first and second rock bands, which were more moderate but contained several tricky cruxes and some inobvvious route finding. Just when things got properly cold, we reached easy ground, and simul climbed through deep snow to the junction with the Cassin at 17500'.

We were properly worked at this point and slowly made our way up, grateful for the few scoured sections that made for easy travel. At 18,400 we were pleased to encounter Jim and Jake, two climbers from Wyoming making a gentlemen's ascent of the Cassin. They were nice enough to break Trail for 800 feet, then we took over for the last 1000 to Kahiltna Horn. This was honestly the hardest part of the day, although perfect weather made it a bit more reasonable. We strolled to the summit in windless, warm conditions, then began jogging down the west Buttress.

Although it only took us 30 minutes between camps, our descent back to ski hill took hours, as we stopped to chat, eat and drink with various friends all the way down the mountain. We crashed for 8 hours at ski hill, and returned to basecamp the next day.

Overall Michael and I agree that the quality of the climbing is up there with the best we have ever done, with many pitches that would have lines in popular mixed climbing areas. While sustained, the climbing is not desperately difficult by modern drytooling standards, and more people should certainly climb this route! We were both pleased by how it went for us, our plan worked well, we climbed fast, and carried all our equipment up and over, while relying only minimally on pre-broken trail.

Michael Gardner and Sam Hennessey
Gardner’s Alaska Range resume includes the second ascent of First Born (House/Helmuth, VI 5.9 WI5) on the Father and Sons wall, and Hennessey significant ascents are Deprivation (Twight/Backes, VI WI6 M5) on Mt. Hunter, the Bibler Klewin (VI WI6 M6 A0) to the cornice bivy also on Mt. Hunter, and the first ascent of Devil's Advocate (V WI5 M4) on Reality Peak. They feel that climbing the SW Face of Denali in a push was significantly more taxing than any of those ascents, and the climbing was more difficult and sustained than those routes, aside from the Bibler Klewin, which is in a league of its own.