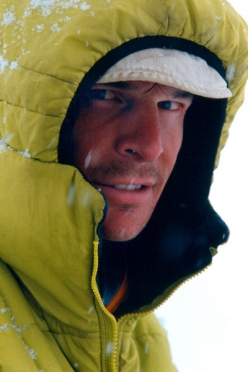 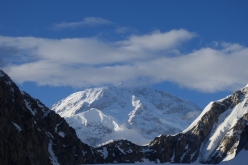 Steve House, looking back on the Denali Slovak Direct

17 years after his ground-breaking ascent, American alpinist Steve House looks back on the extremely fast repeat of the Slovak Direct up the South Face of Denali (Alaska), climbed with Mark Twight and Scott Backes in 60 hours non-stop.

Using the recent 5-day repeat of the Slovak Direct on Denali (6194m) by the young Italians David Bacci and Luca Moroni as a pretext, we asked Steve House to recall his astounding ascent carried out in 2000 with Mark Twight and Scott Backes in 60 hours of non-stop climbing. At that time their ascent - only the third after the 11-day first ascent carried out in 1984 by Blažej Adam, Tono Križo and František Korl and after the 7-day second ascent by Kevin Mahoney and Ben Gilmore - marked a radical shift in why and how climbs were made. Better still: the motivation, starting from the route and the mountain, was aimed at trying to understand more about themselves. They chose a path and a method - both difficult and in some respects "crazy" - that took them beyond their physical and mental limits. The result was an epic, if not absolutely unique, ascent (read House's Beyond The Mountain to find out more). Their experience was based on their climbing partnerships and on a journey that was intended to go beyond the boundaries of the usual way of thinking. Theirs was the search for illumination and a vision, but also, and above all, as Steve House summarizes below, an experience that was both formative and unforgettable.

Our dream with the Slovak was to push ourselves right to the edge of what we thought was possible, and see what would happen to us. We did not care about repeating the route (we missed the 2nd ascent by a few weeks as a then-unknown rope team climbed the route the month before us). Or setting a time or speed-record. We saw what I still believe is the most difficult and most beautiful route on Denali, and we saw a forge. A place we could enter, and come out transformed. Re-shaped. Tempered.

It was very important that the three of us were very close. And it was important that we were close in each relationship. Scott and Mark were, and still are, very close to one another due to many experiences they had as a rope team and lifelong friends. Scott and I spent important time together, most notably climbing M-16 on Howse Peak in 1999. And Mark and I spent time together on several previous expeditions in Alaska. We are all still remarkably close friends today, 16 years later.

The forge worked. We all learned new things about ourselves and about each other. We saw just how strong our wills to live, to have life and embrace it to the full extent was. The closer we got to dis-order (we once lost our way on the route and had to make several abseils), the more we felt our resolve to climb, to live, strengthen. By the time we got to the top we were, strangely, full of energy. We almost ran from the summit down to the 14,200’ camp in just over two hours time. The process emptied us, and filled us. The climb almost destroyed us, it made us weak, almost killed us, but we only got stronger. And we still have that strength today.

To find out more about Steve House and his alpinism courses check out www.uphillathlete.com

11.08.2016
Steve House / knowing yourself
American alpinist Steve House shares his thoughts about how failing wisely provides interior growth. Originally posted only on facebook, House has kindly allowed his text to be republished on planetmountain.com.

14.09.2005
House and Anderson forge new line up Rupal Face
Steve House and Vince Anderson have ascended a new route up the famous and immense Rupal Face on Nanga Parbat (8125m).