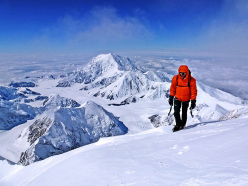 Andy Houseman ascending the final meters to the summit of Denali (6194m) in Alaska on 27/06/2012 after having climbed the Slovak Direct.
Photo by Nick Bullock 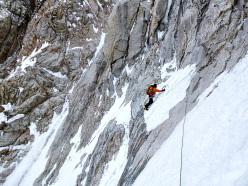 Slovak Direct on Denali climbed by Bullock and Houseman

From 24 - 27 June 2012 British alpinists Nick Bullock and Andy Houseman made a rare repeat of the Slovak Direct route up Denali (6194m) in Alaska.

"Ever since reading Mark Twight’s account of climbing the Slovak in a single push along with Scott Backes and Steve House I have dreamt about attempting this climb. It’s one of those rights of passage routes – five thousand, five hundred feet of technical climbing, three thousand five hundred feet of classic mountaineering – nine thousand feet in total (included for those whose maths is as bad as mine). Climbing the Slovak was a realisation of a dream..."

This is how British alpinist Nick Bullock summarises his latest adventure, an extremely important repeat together with compatriot Andy Houseman of the Slovak Direct on Denali (alias McKinley) in Alaska. Established over a period of 11 days in 1984 by the extremely talented Slovakian trio Blajez Adam, Tono Krizo and Franticek Korl, this route breaches the South Face of Denali via a 2700m line and difficulties up to VI (Alaska grade) WI6 M6+ A2. In its 28-year-history has been repeated only five other times, including that by Twight, Backes and House in 80 hours... It's easy therefore to understand why this route and this 6194m summit have fuelled the dreams of Bullock and Houseman for such a long time!

The British duo repeated the route in a total of 84 hours. After a "false start" due to the serac still being too dangerous the two set off at 2:30 am on 24 June. 9 hours later they established a bivy at the bergschrund of the obvious hanging glacier. "Most of the climbing on the first day was reasonable" commented Bullock on his blog "although one steep hanging icicle provided spice."

"Day two provided the raw flesh of the Slovak" continues Bullock "twenty seven hours in a single push reaching slopes at the side of Big Bertha and then on to the Cassin. The climbing was similar to The Colton/Macintyre on the Grandes Jorasses but on steroids, there was just so much quality. Runnels, goulotte, icefall, Cairngorms mixed, Canadian waterfall ice, and all in an amphitheatre that large we were insignificant insects."

The two reached the end of the technical difficulties after 27 hours of non-stop climbing and bivied for a second time where the Slovak Direct joins the Cassin ridge. It's worth noting that Housman needed an hour and half on the last pitch, admitting later that he had never previously had to dig so deep as on those 70m!

After a short respite the two were separated by just over 1000m to the summit and while this final section is considered technically far easier than the terrain below, it remains a formidable endurance test. In fact, shortly after having restarted the two were blocked by high winds and forced to bivy for a third time. Luckily 16 hours later the winds died down slightly and they reached the yearned-for summit at 16:30 on 27 June.

"Climbing the upper section of The Cassin," affirmed Bullock "was purgatory..." before concluding on his blog "Although I have climbed extensively in the Himalayers, the feeling of being ‘out there’ has almost never been so strong as on this climb." After descending via the West Buttress, Houseman too had no doubts "Six days out, four on the route and the most fulfilling, committing and totally absorbing experience in the mountains I have ever had."

For more photos and extensive reports check out www.andyhouseman.blogspot.co.uk and www.nickbullock-climber.co.uk