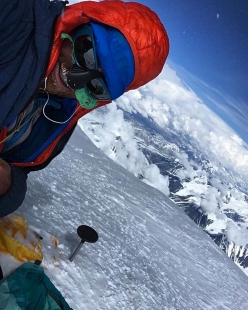 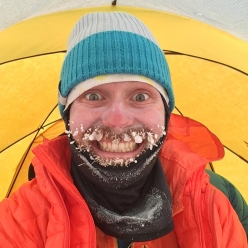 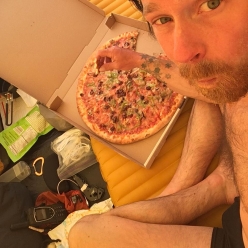 After what Colin Haley himself describes as at least a decade of scheming and daydreaming, and three unsuccessful attempts (2010, 2011, 2012), on 5 June 2018 the American alpinist set a new speed record on the famous Cassin Ridge up Denali in Alaska, climbing the elegant and challenging outing first ascended from 6 - 19 July 1961 by an Italian Ragni di Lecco expedition in a mere 8 hours and 7 minutes from the Bergschrund to summit. Ascents of one of the most coveted alpine routes in the world usually take between 3 - 7 days and after his race upwards Haley commented that he was “happy and proud” of this achievement. Understandably.

Colin, let’s start with the route. Can you briefly describe this climb?

The Cassin Ridge is considered one of the all-time classics of alpine climbing in North America, and I personally think it is well-deserving of that status. First off, it is on North America's only 6,000m peak, which is cool. Second, it is on the sunny side of Denali, which, at those far northern latitude, is a big plus in terms of enjoyment of experience. It is a very big route (it gains about 2,500m of elevation from bergschrund to summit). The climbing is varied, including an ice couloir, mixed pitches, and a corniced arête, and the technical climbing is nice, on high-quality, solid granite.

The talk is about a new record. Can you provide us with some background info to previous fast ascents?
Technically speaking the previous record was set by myself and Bjørn-Eivind Årtun of Norway in 2010, when we climbed from the Bergschrund to the summit in 17 hours. Realistically though there were two faster times, but both were tricky to consider records as in both cases the climbers didn't make it all the way to the summit. The following times are to the summit ridge, which is pretty close to the summit: Mugs Stump in 15 hours in 1991, and Will Sim and Jon Griffith in 14:40 in 2011.

How well did you know the route?
I had climbed the Cassin once completely in 2010, and I climbed about 65% of the route in 2011 with another Norwegian friend, Nils Nielsen. So, I'd say I knew the route pretty well, but since my last time on the technical portions was 7 years ago I didn't remember the route-finding very well.

What were conditions like?
I ALMOST had the incredible fortune of tracks up the entire route, but unfortunately it snowed a few centimeters the night before, which combined with wind and spindrift filled in tracks quite a bit. So, on the lower portion of the route I had filled-in tracks, that in places were quite helpful, and in other places were so filled in that I couldn't find the track at all. Starting at 5,000m there was a track that had been made earlier the same day, and therefore wasn't filled with snow, and was extremely helpful. So, all in all, conditions were quite good for moving fast. If it hadn't snowed the night beforehand I think I probably could've done about an hour faster, which is an indication of how conditions-dependent this sort of speed climbing is.

Those 8 hours… a physical and mental test? And how did you train for the ascent?
The crux was getting off-route near the top of the second rock band, and accidentally climbing a more difficult variation. I'd say that many solos are very mentally taxing for me, especially things like Torre Egger, but since the technical climbing on the Cassin is pretty easy for me, it was more of an athletic challenge than a mental one. For training, I spent 6 weeks in Chamonix beforehand, just doing a lot of alpine climbing and ski mountaineering.

How alone were you? Did you have a backup team following progress or was this just something for you?
I definitely did not have any sort of backup team! However, I wouldn't say that I was very "alone" either... I passed three other parties on the route, and another just before the summit!

Ritual question: what gear did you take with you?
A pair of ice axes (Quark), a pair of monopoint crampons (Dart), one lightweight helmet, ultralight collapsing ski poles, ice axe umbilicals, 3.5 liters of water, 13 energy gels, 2 energy bars, 2 pairs of gloves, extra puff pants and puff jacket, an mp3 player! I didn't have a rope or a harness.

No rope or harness..
The obvious reason to leave them behind is to save weight. Of course you have to be confident that you can free-solo up, down, or across whatever terrain necessary to get yourself to safety if the weather were to change or something like that. Without a rope, your safety is completely dependent upon your ability to climb well, which is why I still choose to carry ice axe umbilicals, as dropping an ice axe would be a pretty terrible mistake.

There’s always talk about the ascent. What about the descent?
The descent on Denali is so easy that it is essentially a non-factor. So many people climb the standard West Buttress route that the way is very easy to follow, and the one steep section (55-degree ice for about 100 meters) has fixed ropes. It is a very big contrast from neighbouring Sultana, where arriving on the summit from the Infinite Spur, you really are only half-way done with your journey, the "normal" route is very complex to descend.

In the past the Cassin Ridge was considered the toughest route on Denali
Yes, but nowadays there are several routes on the southwest face and south face that are more difficult. The most technically demanding routes on Denali are the Denali Diamond, Light Traveller, and the Slovak Direct. None of those routes have been climbed solo, or climbed in a day for that matter.

Last question: how on earth did you get the pizza to Denali Basecamp?
One arrives to Denali basecamp by skiplane from the town of Talkeetna. If one is coming down to BC for a day, and you happen to have a friend in Talkeetna, then you can ask him/her to buy a pizza and put it on a plane that is bringing climbers to basecamp. So yes, I ate mine before skiing up the East Fork of the Kahiltna, just before attempting the Cassin.

CASSIN RIDGE, DENALI
First ascended from 6 - 19 July 1961 by the Italian Ragni di Lecco members Luigino Airoldi, Gigi Alippi, Jack Canali, Riccardo Cassin, Romano Perego and Annibale Zucchi, the elegant and challenging line is one of the most famous and sought-after alpine routes in the world. After the ascent Cassin was congratulated via telegram by the President of the United States of America, John Kennedy. The route is graded Alaska Grade 5, 65°, 5.8 AI4, 9,000 feet and usually takes anywhere between 3 - 7 days.