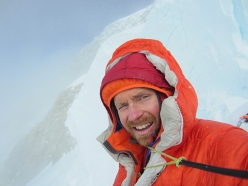 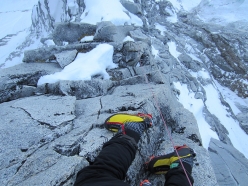 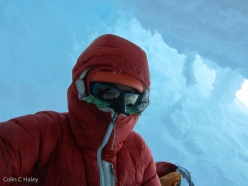 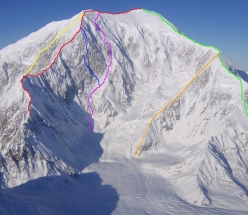 American alpinist Colin Haley has made the first solo ascent the Infinite Spur on Sultana - Mt. Foraker in Alaska. While the ascent required just 12 hours 29 minutes from the Bergschrund to the summit, the descent proved a harrowing ordeal that turned out to be one of the most intense experiences in his life.

America’s Colin Haley has made the first solo ascent of the Infinite Spur, the nigh never-ending arête that leads up the South Face of Mount Foraker in Alaska, first climbed in 1977 by George Lowe and Michael Kennedy. Haley climbed the route on 1 June alone in a record-breaking 12 hours and 29 minutes to the summit after having climbed the same route a few days earlier together with Rob Smith in 18 hours and 20 minutes. Although Haley’s solo ascent ran smoothly, the descent proved quite the opposite, with a full-blown Alaskan storm making for what he describes as "one of the most intense experiences of my life."

The mountain, originally referred to as Sultana by the local Athabascan population, is the second highest in the Denali range with two distinct summits, the North 17,400 ft. (5304m) and South summit 16,810 ft. (5124m). The Infinite Spur was forged over 11 days between the end of June and start of July 1977 by Lowe and Kennedy; this ascent was hailed as "one of the crowning achievements in the history of North American mountaineering" and it took eleven years before the 3000m line was finally repeated, at the hands of Mark Bebie and Jim Nelson in 1988. Barry Blanchard and Carl Tobin made the third ascent in 2000, while a year later Steve House and Rolando Garibotti completed the route to the summit in a mere 25 hours, a time matched in 2009 by the Swiss trio Simon Anthamatten, Samuel Anthamatten and Andreas Steindl. With very few other repeats in the ensuing years the route lost none of its awesome reputation, and the lowpoint is certainly May 2006 when Sue Nott and Karen McNeill tragically lost their lives while attempting to become the first women to climb the line.

Haley and Smith flew to Kahiltna Basecamp on 2 May 2016 and acclimatized by climbing along Denali’s standard West Buttress route. Haley reached the summit alone - his 13th time on Alaska’s highest point - on 15 May, and after some rest days the two then attempted to acclimatize further by ascending Foraker’s Sultana Ridge, their planned descent route after Infinite Spur. Poor weather impeded them from getting any higher than the summit of Point 12,472 which Haley now suggests could be called, much less empirically, Lady Point in memory of Sue Knott and Karen McNeill. Early on 27 May Haley and Smith then set out in good weather to climb the Infinite Spur in 18 hours and 20 minutes, following the tracks of three Britons along the first half of the route. They descended the Sultana Ridge without much difficulty and returned to Kahiltna Basecamp at 6am on May 29. After a few hours sleep the plane arrived and whisked Smith home, leaving Haley alone at the base of the mountain.

Keen on benefitting from the exceptional route conditions and 5 people’s tracks on the Sultana Ridge, Haley left basecamp at 7am on 31 May after less than two full rest days. He crossed the Bergschrund at 3:43am on 1 June and waved goodbye to three other Britons (remarkably the route saw four attempts in one week, after not having seen a single ascent since 2009!) with what he describes as a " very lightweight backpack". This translates into "crampons, ice axes, helmet, a swami belt, ice axe umbilicals, and two key-chain carabiners for clipping my ice axes to my swami belt on the rock climbing portions. I carried not a single real carabiner, nor a single piece of protection." The only rope he carried was a 15m 5mm cord, lent to him by the Brits which he used only twice to haul his pack on the hardest sections of the route.

Haley made rapid progress, describing the majority of the route as "very casual and easy to be climbing ropeless, although the sustained blue ice on the upper portion of the "Knife Edge Ridge" was certainly tedious." He completed the Knife-Edge Ridge at 11:20am and after just over an hours rest he continued along the easier upper slopes and reached the summit at 4:18pm, 12:29 after having crossed the Bergschrund, commenting "Considering how big and serious of a route the Infinite Spur is in general, it had been a shockingly casual and joyful ascent."

Haley’s joy did not last long however and he would soon become engaged in a battle for survival. Although the initial descent ran smoothly, down the Japanese Route to where this joins the Sultana Ridge, after an hour’s rest at this junction trouble set in: the light snowflakes that had accompanied his ascent transformed into heavy snowfall, bringing visibility practically down to zero within minutes. With only minimal equipment, without bivy gear and already tired after an exhausting climb, Haley was was forced to keep on the move if he didn’t want to remain trapped on the mountain.

For the next 48 hours Haley negotiated a descent he describes as one "long, harrowing blur, done entirely in storm, in which I became progressively more sleep-deprived, finally arriving in basecamp after being awake nearly three full days." Although he triggered at least 30 slab avalanches during the descent, his main concern was lack of visibility. Route finding proved arduous, resulting in lots of back-tracking; on one occasion he spent six hours on the same spot while waiting for visibility to improve "alternating between bouts of light exercise to stay warm, and extremely brief (maybe 5 minutes maximum?) cat-naps with my head resting on my knees." The wind-deposited snow made trail-breaking brutal and he estimates he spent a total of 2-3 kilometers "literally crawling on my hands and knees." To compound to the difficulties, Haley burnt his pot while using the last of his fuel, and the water he drank made him vomit what little liquid he had left in his body. Although this was possibly the lowest moment of his ordeal, he did manage to make 400ml of soup that gave him enough energy to reach the crevasse at Lady Point where a few days earlier he and Smith had stashed some food.

After three hours rest, Haley stepped out of the crevasse at around 1am on 3 June and after negotiating more scary avalanche-prone slopes on Mt. Crosson he stumbled into Kahiltna Basecamp around 7:30 pm on June 3, 84 hours after having left base camp.

Writing about his ascent after the ordeal, Haley states "I think I succeeded in soloing the Infinite Spur in a fun, sporty fashion. By accident I ended up getting all the adventure I ever could’ve wanted, and way more. I’m proud of having made the first solo ascent of the Infinite Spur, and I’m proud of having managed to climb the route quite quickly, but in the end it wasn’t "worth it" in terms of all the risk I was exposed to. If things had gone as I had planned and hoped it would’ve already been a fairly risky descent, but still "worth it." As things turned out, it was simply way too dangerous, and I’m not proud of that. I am proud however that, given the very serious situation, I think I consistently stayed level-headed, made the safest decisions possible, and got back without incident."

Colin Haley is obviously no newcomer to Alaska nor to Sultana. In May 2010 he teamed up with Norway’s Bjørn-Eivind Årtun for a 37-day expedition, during which they darted up the Cassin Ridge on Denali, without a beaten track, in a mere 17 hours from the base to the summit. In June the two then made the first ascent of the highly committing Dracula (VI, AI4+, M6R) up the southeast face of Mt. Foraker, which Haley described as one of his best climbs in Alaska and which made the Cassin Ridge "feel like a small, non-commiting route by comparison."

An in-depth interview with 26-year-old American alpinist Colin Haley, to discover his approach to alpinism, from Alaska to Patagonia.