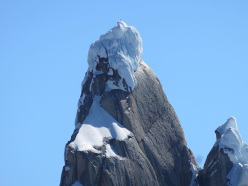 American alpinist Colin Haley on the summit of Torre Egger in Patagonia after having made the mountain's first solo ascent. The photo was taken by Corrado Pesce during his ascent of Aguja Desmochada with Tomy Aguilo.
Photo by Corrado Pesce 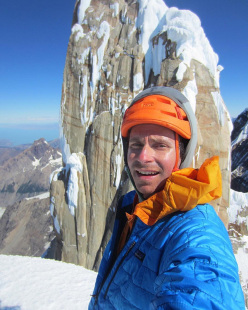 American alpinist Colin Haley on the summit of Torre Egger in Patagonia after having made the mountain's first solo ascent.
Photo by Colin Haley 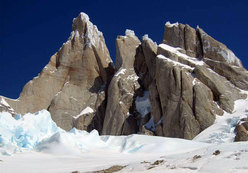 Interview with American alpinist Colin Haley who has just carried out the first solo ascent of Torre Egger (2850m) and Punta Herron (2750m) in Patagonia, requiring 16.5 hours for the ascent and 9 for the descent.

Colin Haley has just completed the first solo ascent of both Torre Egger and Punta Herron in the Cerro Torre massif in Patagonia. The American alpinist required sixteen and a half hours to reach the summit of what is reputed to be the most difficult summit in Patagonia having left the Noruegos bivouac at about 12:45. He traversed ramps across the East Face of Cerro Standhardt and abseiled into Col dei Sogni, then followed Spigolo dei Bimbi (Adriano Cavallaro, Ermanno Salvaterra, Ferruccio Vidi, 1991) to the top of Punta Herron, from where he followed the Huber-Schnarf route (Thomas Huber, Andreas Schnarf, 2005) to the summit of of Torre Egger. While the ascent “went faster and more smoothly than I had ever hoped for”, the descent “was a bit of an epic”. Haley's success comes in the immediate aftermath of Fitz Roy climbed in a day together with Andy Wyatt and also, at the end of 2015, his solo ascent of the same peak via the California route. Patagonian veteran Ermanno Salvaterra had just one thing to say: "Incredibile, a monstruous climb!"

What ascent route did you take? Presumably you’d climbed the route before?


I climbed via Spigolo dei Bimbi (to the top of Punta Herron), and then the Huber-Schnarf (to the top of Egger). To get to the base of Spigolo dei Bimbi (the Col dei Sogni), I traversed across the ramps on the east face of Standhardt, and then rappelled down into the last pitch of Tobogan. This is the overall easiest route to the summit of Torre Egger, and I had done it entirely last year with Alex Honnold, and most sections of it I had even done multiple times before.

While the ascent ran relatively smoothly, the descent proved exciting to say the least…
For the descent I rappelled down the south face of Egger, to what I refer to as the Col de la Mentira, and then from there down the American (original) Torre Egger route, down the lower east face of Cerro Torre. The descent took roughly nine hours. On the second-to-last rappel down to the Col de la Mentira, I got really unlucky and had the worst stuck rappel-rope scenario that I've ever experienced. On a completely vertical, full 60m rappel, my rope somehow got very stuck after pulling down only a couple meters of rope. Because the terrain above was overhanging, I couldn't retrieve the other end, which was now hanging in the air a couple meters above me. I spent literally 1.5 to 2 hours bouncing as hard as I could on my rappel rope with a Micro Traxion (a small, lightweight, progress-capture pulley, Ed), pulling it down a few centimeters at a time. For a while I was quite terrified that I would be descending the lower east face of Cerro Torre with only 20 meters of 5.5mm rope... In the process of bouncing on the end of the rappel rope (setting up a pulley system would've probably been wiser), my rappel rope lost all of the sheath in a whole bunch of sections. It was a huge relief though to finally pull the ropes down, and be able to continue the descent in a relatively normal fashion.

In 2010 you made the first solo ascent of Aguja Standhardt. Five years down the line you now state you’re a far better climber
I think that the biggest difference is that my rock climbing ability is much higher. I made a very conscious decision to not go to Himalaya at all for three or four years, and devoted much more of my northern-hemisphere summer to rock climbing, mostly in Squamish.

You climbed solo, a style often under appreciated or misunderstood. Can you put this one into some sort of context, with other mountains elsewhere and also in Patagonia
A couple of my best other solo climbs were a solo traverse in BC of Mt. Waddington, Mt. Combatant and Mt. Asperity (making the first solo ascent of each), and a solo attempt on the north buttress of Begguya (a.k.a. Mt. Hunter, in Alaska) that ended only 100m below the summit. It's no problem that solos are underrated, just an observation that I've noticed over the years. A perfect example is just recently: the one-day round-trip ascent that Andy Wyatt and I made of Chaltén (a.k.a Cerro Fitz Roy) received a lot of attention. A week earlier I had made a solo ascent via the California route - a much more difficult and much greater accomplishment, that saw little attention by comparison. it really doesn't matter, it's just interesting sometimes which ascents are "picked up," compared to others, often to my surprise.

As to why Torre Egger is a harder solo than Standhardt, Cerro Torre or Chaltén, it's just for the same reasons that climbing Torre Egger with a partner is harder than climbing those other peaks with a partner - it is long, complicated, and while there are no specific sections that are truly difficult, the overall ascent is hard to pull off. Also, just to be clear, while I think that soloing Torre Egger is a greater accomplishment than soloing the Ragni Route (on Cerro Torre, Ed), I think that this ascent, at best, equals Marc-André Leclerc's accomplishment last year of soloing the Corkscrew on Cerro Torre. And, of course, the solo first ascent of the Goretta Pillar by Renato Casarotto ("God with a mustache"), is still the most badass solo that's been done here, when put in the context of the era.