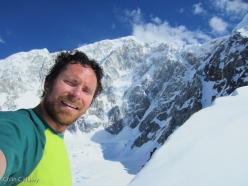 Back below Sultana’s south face, while approaching on the morning of May 31.
Photo by Colin Haley 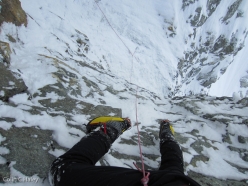 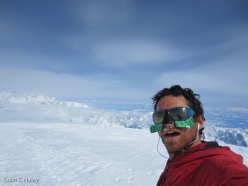 On the summit of Sultana alone at 4:18pm
Photo by Colin Haley 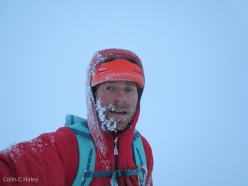 Nearly to the top of Lady Point, super happy and relieved to finally be in terrain that I was confident I could find my way through regardless of the weather.
Photo by Colin Haley

Colin Haley, solo, fast and light on the Infinite Spur in Alaska

American alpinist Colin Haley shares his thoughts about his recent fast solo ascent of the Infinite Spur on Sultana - Mt. Foraker in Alaska. Originally posted only on facebook, Haley has kindly allowed his text to be republished on planetmountain.com.

My friend Kelly MF Cordes was asking me how Rob and I went so much faster on the Infinite Spur than previous ascents, and how I then went much faster yet, and it occurred to me that other people might have a similar question, so I thought I'd share my thoughts here:

First and foremost, conditions are everything on big routes in the Central Alaska Range. Even the most technical routes on Denali and Sultana involve more than half the elevation gain on snowfields that can hold enough snow for hard trail breaking. Thus, whether or not you have a lot of hard trail breaking can easily literally halve or double your ascent time. The last time I tried the Cassin Ridge, in 2011 with Nils Nielsen, we were very fit and very well acclimatized, but had horrendously bad trail breaking. We eventually got so exhausted that we didn't even manage to finish the route, and instead traversed back to the 4,200m camp. If, on the exact same day we had perfect tracks ahead of us, I'm confident that we would've gone from the 'schrund to the summit in under 9 hours. When Rob and I climbed the Infinite Spur, we had perfect tracks from the British party until just under the Black Band, and then a wind-scoured upper mountain with very little trail breaking. Of the eleven ascents of the Infinite Spur thus far, I think it's very likely that Rob and I had the best conditions of any ascent.

Second, anyone who tells you that gear doesn't matter is clueless (at least in alpine climbing). I'm 100% certain that Rob and I were carrying less total mass of material than any other roped ascent of the route. My ice axes, crampons and helmet are all significantly lighter than they were just three years ago, and massively lighter than the ice axes, crampons and helmets that Steve and Rolo had in 2001. My helmet is the lightest one on the market. My ice axes are Petzl prototypes which are noticeably lighter than Quarks, which are already some of the lightest technical ice axes on the market. My crampons are steel in front and aluminum in back, and connected by dyneema cord. We cut the leg loops off of our harnesses. Our cams were the new BD ultralights. Our ice screws were the aluminum Petzl Laser Speed Lights. Our carabiners and slings were certainly way lighter than the lightest ones available in 2001. We climbed on a single 7.7mm rope, and didn't bring a second one. I wore single boots on both ascents - the La Sportiva Batura, of which the current version is significantly lighter than the first version that came out in 2007. Yeah, we brought sleeping bags, they weighed 700g each. Yeah, we brought foam pads, but have you seen how light the NeoAir pads are? We had a Jetboil Sol, which is much lighter than the original Jetboil, which already was much lighter than whatever stove Steve and Rolo had in 2001 (probably a white gas stove).

Even relatively minor differences in strategy can make a major impact. For example, on my previous single-push ascents of big routes in the Central Alaska Range, I had always brought one freeze-dried dinner each, to break up the monotony of eating so many energy bars and gels. This year I was wise enough to realize that is a major mistake - Not only does it waste a lot of fuel to bring water to a boil, but the freeze-dried meals are slow to cook, slow to eat, and slow to digest. I think that even something as simple as not bringing any freeze-dried meals might've easily saved us 30 minutes.

Rob and I climbed the route in about 73% the time of the previous fastest ascent. However, when you consider that this past winter Alex Honnold and I did the Torre Traverse in less than 25% of the time of the previous fastest ascent, it shouldn't even be so shocking that I was able to solo the Infinite Spur in 50% of the time of the long-standing speed record. In all these cases there is of course some fitness and skill involved, but mostly it is a question of shifts in paradigm and perspective. Rob and I already had the lightest packs of anyone who has climbed the route, and when I went back alone I dropped a whole bunch more weight by bringing essentially zero rope or hardware. Rob and I already simul-climbed everything, and when I went back alone I wasted zero time placing gear or belaying.

To be honest, even my time of 12:29 is not actually very fast. If I were to do it again, if I were very well acclimatized and had perfect conditions, I'm pretty sure I could do it in 9 hours. I'm also pretty sure that, under perfect conditions, someone like Ueli Steck could do it in considerably less time than that. I'm totally serious and quite confident in these statements. If you break it down, that shouldn't be so surprising. First off, the elevation gain from 'schrund to summit is roughly 2,700m. Doing 2,700m of elevation gain in 9 hours? For someone like Kilian Jornet that is literally a rest day. Second, for a high-level alpinist in 2016 the technical difficulties of the Infinite Spur are basically trivial, so they cannot be considered a significant hindrance on speed. The only spot where I was slow due to the technical difficulty was the Black Band, and someone like Ueli would've raced through it. If conditions are perfect then trail-breaking would be a non-issue, and if one is well acclimatized then the altitude would be a non issue.