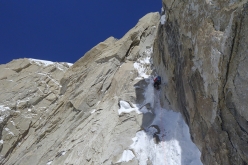 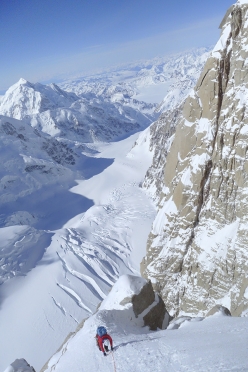 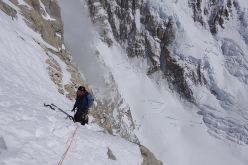 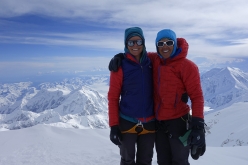 Interview with Anne Gilbert Chase after the ninth ascent and first female ascent of the Slovak Direct on Denali, climbed from 2 - 5 June 2018 with Chantel Astorga.

From 2 - 5 June 2018 Chantel Astorga and Anne Gilbert Chase repeated one on the most coveted and fearsome climbs in Alaska, the Slovak Direct up the South Face of Denali (6194 m). First ascended from 13 - 23 May 1984 by Blažej Adam, Tono Križo and František Korl, this huge outing was famously repeated in a 60-hour push by Steve House, Mark Twight and Scott Backes in 2000 shortly after the climb’s second ascent at the hands of Ben Gilmore and Kevin Mahoney. After a failed attempt in 2017, Astorga and Chase completed what is reputed to be only 9th ascent of the route and the first female ascent. Colin Haley, who recently raced his way up the Cassin Ridge, stated in no uncertain terms that their climb "demonstrates that they are some of the best female alpinists in the world right now." planetmountain.com checked in with Anne Gilbert Chase to find out more.

Anne Gilbert, first of all, what's your relationship with Denali
?
Both Chantel and I were guides on Denali for a few years back. Astorga guided from 2008 to 2011 and I guided from 2010 to 2012. We each guided for a handful of years and also spent time in other parts of the range climbing on personal trips. So yes, Denali is very special to both of us and it is a place that we both cut our teeth in alpine climbing.

Why the Slovak Direct?
I have always thought the South Face of Denali was beautiful and the most stunning aspect on the mountain. I spent a few years guiding on the West Buttress and was familiar with the mountain and different routes. But it wasn’t until 2015 when I climbed on Mascioli’s Pillar on the South Buttress that I got a up close look at the South Face and the Slovak Direct route. At that point I knew I wanted to climb it.

How much had you two climbed together before the Slovak Direct?
Chantel and I first tied in together last May 2017 when we tried to climb the Slovak Direct. We had been acquaintances since 2010 when we met on Denali guiding and had stayed in touch over the years but had not climbed together until then. After our attempt on the Slovak, my husband, Jason Thompson, and I asked Chantel to join us on an expedition to India where we establish Obscured Perception (1400m, VI WI5 M6 A0 70 degree snow) on Mount Nilkantha in India's Central Garhwal Himalaya.  And then Chantel and I decided to attempt the Slovak again this spring.

So how did the ascent go?
We climbed from 2 - 5 June 2018. Summiting on day 4. So we spent 3 days climbing on the face. Overall things went surprisingly smooth. The climbing was difficult but pretty straight forward and we did not have too much trouble route finding. The weather was really good for the first 2 days, with spindrift in the early mornings and late evenings. It wasn't until the evening of the 3rd night that a storm moved in on us around 15,800. It was super cold, snowing, windy and spindrifting and there was no where to bivy so we had to keep going to 17,600 where there is a bivy spot on the Cassin. That was a rough few hours for sure. But otherwise yes the ascent went super smooth. We were pretty average or maybe a little faster then most parties. I know the Italians spent 5 days on it last year. But it is very condition dependent.

Talking of which - what were conditions like?
Conditions were quite dry for us. Looking at pictures from previous ascents and talking with people, it was definitely dry. We were pretty early on the route, so it is not a total surprise that it was dry and it was generally a dry year in the range overall. But the WI6 ice pitches were not in very good shape and made for much harder climbing then typical. Besides the open bivy on the 2nd night, which we knew was a chance, things went very smoothly and as planned. We summited on the day we thought and everything went pretty much as planned. Very surprising but really nice.

What was the hardest moment?
There are a lot of hard pitches that feel pretty difficult due to conditions, cold, altitude, carrying a heavy pack and being tired. But there are 2 that stick out in my mind. The final WI6 pitch was extremely hard due to conditions. It was a dry year in AK and since we climbed the route early, the ice was not in as good of conditions as it typically can be. The last ice pitch was overhanging and the ice was very bad. This made for very difficult climbing.
Also the very last technical pitch on the Slovak was super hard. We did not find the right exit corner and ended up climbing a very steep ice and mixed corner. On top of the difficult climbing, we were in the middle of a pretty intense storm that was snowing and spindrifting on us. We were very cold and had little to no visibility and were at the end of an 18 hour day. That was probably the hardest moment.

How do you view your repeat, on a personal scale? Was this a next step?
Honestly I saw the Slovak Direct as a route that I really wanted to climb and knew that I could do it if I had the weather window to attempt. It is definitely the most sustained alpine route I have done, but I felt that it was totally within my ability the entire time. I never felt that I was sticking it out there too far or that I was out of my league. I don't look at this climb as a "next step" I look at it as a beautiful route that I was aesthetically drawn to and was determined to climb. It just happens to be a pretty mega route on Denali.

Now that you’ve repeated it, what can you say about the first ascent and ascentionists back in 1984?
Man, the first ascentionists were pretty hard core for sure!! They spent 9 days on the route and took 150 rock pitons and 40 ice pitons. That was over 35 years ago and is still considered a very hard route by today's standards. So yeah I think they were badass and had an amazing vision to establish a new route on the South Face of Denali.

Last question: how would you like your ascent to be remembered and celebrated? As a rare repeat - the 9th ascent - or the first female ascent
For me, I am stoked to have climbed the Slovak route and be apart of the 8 other ascents that I think are all pretty amazing. I am proud to be on a list with some of the best alpinists in the world. Honestly I don't care too much that we were the first females to climb the route and that was not something we thought about when we climbed it. However, if our ascent inspires women to go into the big mountains and achieve their dreams than I am all for it, but the title of "first female ascent" is not that important to me.