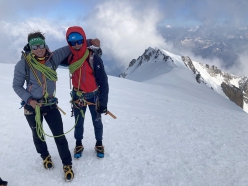 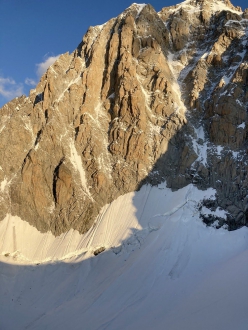 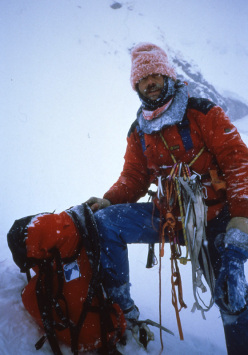 Mountain guides François Cazzanelli and Francesco Ratti have enchained the Ratti-Vitali route on Aiguille Noire de Peutèrey, the Gervasutti - Boccalatte route on Picco Gugliermina and the Central Pillar of Frêney, first climbed in 1961 by Chris Bonington, Ian Clough, Jan Duglosz, Don Whillans before proceeding to the summit of Mont Blanc. The so-called Super Integrale de Peutèrey, or Frêney trilogy, was climbed in 1982 by the great Italian mountaineer Renato Casarotto alone and in winter during an epic ascent that has gone down in the history of mountaineering as one of the all-time greatest climbs.

On Mont Blanc the two Italian alpinists François Cazzanelli and Francesco Ratti have completed a summer repeat of Super Integral de Peutèrey, also referred to as the Frêney trilogy, carried out for the first time in winter in February 1982 by Renato Casarotto.

The two young Matterhorn mountain guides set off on Wednesday, July 29th from Freney at the bottom of Val Veny where the path to the Monzino refuge begin. 46 hours later they reached Combal, where the path to the Gonnella refuge starts. They returned safely on July 31st having completed a fast ascent of this extremely technical enchainment.

Cazzanelli and Ratti climbed the classi Ratti - Vitali route (Vittorio Ratti, Gigi Vitali 1939) on the West Face of the Aiguille Noire de Peutèrey and followed this up by climbing the Gervasutti - Boccalatte route on Picco Gugliermina where they bivouacked below a large boulder due to an onsetting storm. The following day they ascended the Central Pillar of Freney via the line first ascended by Chris Bonington, Ian Clough, Jan Duglosz and Don Whillans in 1961, and after reaching the summit of Mont Blanc they continued down to the Gonnella refuge. After a short reste, they descended to Cabane du Combal and returned to their starting point at 11pm on July 31st.

While Cazzanelli and Ratti completed the enchainment as quickly as possible, 38 years ago Casarotto climbed alone and in winter. His aim, back then on the Frêney trilogy, was to achieve a perfect symbiosis between Man and Nature.

Mountaineering and mountaineers have changed, as has the climbing gear, the climate, and the mountains themselves. having said that, the desire to explore the mountains and one’s own limits, has not changed in the slighting.  The duo climbed with only a minimum amount of gear; a rucksack, provisions and a sleeping bag.

22.07.2019
François Cazzanelli and Andreas Steindl speed up the Peutérey Integral, Mont Blanc
The two mountain guides François Cazzanelli and Andreas Steindl have carried out an extremely fast ascent of the Peutérey Integral Ridge in the Mont Blanc massif in just 12 hours and 12 minutes. The round-trip back to the starting point at the La Sorgente campsite in Val Veny, Italy, required just 15 hours and 55 minutes.