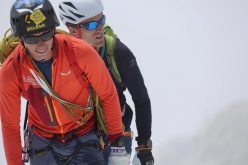 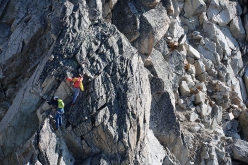 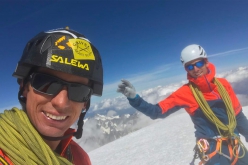 The two mountain guides François Cazzanelli and Andreas Steindl have carried out an extremely fast ascent of the Peutérey Integral Ridge in the Mont Blanc massif in just 12 hours and 12 minutes. The round-trip back to the starting point at the La Sorgente campsite in Val Veny, Italy, required just 15 hours and 55 minutes.

On Friday 15 July one of the longest and most famous ridges in the entire Mont Blanc massif, the Peutérey Integral, or more simply the Intégrale, was climbed at an astounding speed by the Italian mountain guide François Cazzanelli and his Swiss counterpart Andreas Steindl.

Having set off from the La Sorgente campsite in Val Veny at 3:30 am, the duo required a mere 12 hours and 12 minutes to climb the crests and reach the summit of Mont Blanc. Racing back down the normal Italian route past Rifugio Gonella, they returned to the starting point after a total of 15 hours and 55 minutes on the mountain.

Just like Ueli Steck, who in 2013 had taken 16 hours and 9 minutes reach the summit via the Peuterey ridge departing at the Campsite La Sorgente but returning to the campsite at Les Houches in Chamonix, Cazzanelli and Steindl stashed their rucksacks at the base of Aiguille Noire the day before. Cazzanelli and Steindl are not new to these undertakings, in fact last year they climbed all four ridges of the Matterhorn in just 16 hours and 4 minutes.

Peuterey Integral... A small dream I’ve been thinking about for a long time has come true! For some years now I’ve been wanting to climb this huge ridge starting from and returning to the valley in a single push. And I felt that this year was the right one!

Last winter I told Andy about my project and he immediately accepted enthusiastically, so before my departure for Alaska we planned everything in detail. On Thursday 18 July we met up in Val Veny. We prepared our gear and in the afternoon we took our packs to the base of the south ridge of Aiguille Noire and descended back down into the valley! The next morning (Friday 19 July) at 3:30 we set off from the Campsite La Sorgente!! Everything ran perfectly and after 5 hours we reached the summit of the Noire, did the abseils and started up towards Aiguille Blanche. After 9 hours and 30 minutes without any problems we reached the Peuterey col and were ready to start up Pillier d’angle and the Peuterey Rdige. 11 hours and 50 minutes after setting off we reached the top of Mont Blanc di Courmayeur and after 12 hours and 12 minutes we summited Mont Blanc! We hugged each other, Stefano Stradelli and Jerome Perruquet summited as well, after having climbed the ridge in two days, it was a wonderful moment! We stayed on the summit for 10 minutes and then set off again. It wasn’t over, we still had to descend! For the descent we chose the normal Italian route via the Gonnella hut. We began to feel the fatigue, our rucksacks with all the gear seemed heavier and heavier! We grit our teeth and after 15 hours and 55 minutes we returned to the La Sorgente campsite where we’d set off at 3:30 in the morning (it took us 3 hours and 33 minutes to descend). To give you the numbers: in 15 hours and 55 minutes we ascended and descended 4276 vertical meters across 45.37 km.

I want to thank Matteo Pellin who hosted us at his campsite during the training days and during this project! Also, a super thanks goes to Marco Camandona and Luca Rolli who took the beautiful photos you can see! I’d also like to thank Andy Steindl who helped this little dream of mine come true!