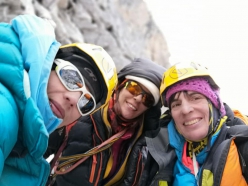 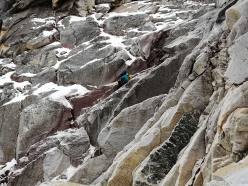 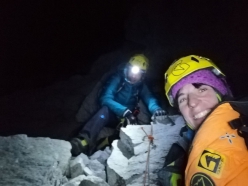 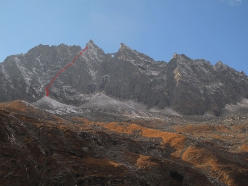 The report by Italian mountaineer Anna Torretta who with Cecilia Buil from Spain and Ixchel Foord from Mexico made the first ascent of Couloir SW (600m, A1, 6a, M5), a new climb up the virgin Mugu Peaks (5467 meters) in the Karnali district of NW Nepal.

The history of Mugu Valley goes back a long way, it’s relatively unknown in the western world and its wealth and poverty fascinated me. Our expedition came about casually, thanks to the Grit & Rock Award which last February awarded this women's expedition project with the first prize of € 4,000. A publication in the Alpine Journal a few months earlier, with a photo, mentioned Mugu Peaks, an unclimbed mountain opened up recently by the Nepalese government. We immediately fell in love with the peak.

Getting to Mugu, however, is not so simple! We started with a flight from Kathmandu to Nepaljung, on the southwest border with India, on the opposite side of Nepal compared to where we wanted to go... From here the nearest airport to Mugu is Gamgadhi, close to Rara Lake, but flights are not regular and at least another 5 days on foot are needed to get to the village. Thanks to the help of our agency Arun and to Ian and Ixchel Foord, we decided to fly from Nepaljung by helicopter to the village of Mugu, and therefore save almost a week and perhaps even more. "The eye of Mugu" immediately attracted our attention, its a rock arch of impressive proportions.

Our expedition was marked by days of beautiful weather but also by the slow, progressive and inexorable arrival of winter, with days becoming shorter and colder. The Mugu valley is exposed to constant, at times gusty winds, which never cease. One stormy night resulted in us changing our plans about climbing Mugu's "eye"! So, after having attempted the central section of the face, we chose the easiest line, ie the SW gully, in order to climb to the main summit. We made one intermediate bivouac and climbed past difficulties up to A1, 6a and M5. Base Camp was located at 4,200 meters, advanced base camp at 5,030m. We were forced to turn around 50 meters below the summit, at an altitude of 5420m, due to the strong winds, the intense cold and the poor rock quality.

All the inhabitants of Mugu were behind us all the way, and have seen in this ascent the possibility of the valley opening up to tourism. This would be major change for the village; Mugu used to be an important trading post between Tibet and the neighboring villages, in fact it used to the the valley focal point and a long time ago Mugu was even part of Tibet. The Chinese then arrived, the border was closed and everything changed.

As a result Mugu transformed from being a trading village to becoming a summer "residence", for the relatively rich who work in Kathmandu, for young people in search of earnings, and for the extremely poor. In spring the Mugu valley is home to Yarchagumba, a parasitic fungus which immobilizes and embalms larvae of moths. It can be used to treat many types of illnesses, including heart and kidney diseases, and it is also known as the "Himalayan viagra". The Yarchagumba is worth its weight in gold for the Chinese and is the valley’s primary source of income.

The mayor of Mugu asked us to talk about this forgotten valley, and I have now told you its story. It is most certainly somewhere remote, for those who like to put in the extra effort and walk long distances, in order to discover what isn’t written in any books. Mugu Peaks offer plenty of potential for other climbs.

We retuned to Gamghadi on foot and this provided us with the chance to see the real side of Nepal, one not yet touched upon by tourism.