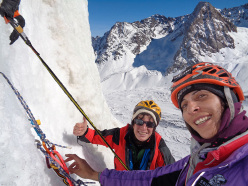 Cecilia Buil and Anna Torretta at the belay of La Gioconda (Cerro Marmolejo)
Photo by C. Buil - A. Torretta 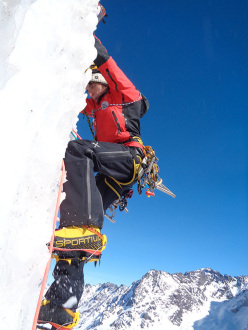 In mid-July Cecilia Buil from Spain and Anna Torretta from Italy made the first ascent of La Gioconda (160m, WI 6) a new ice climb on the glacier Cerro El Marmolejo (6109m, Chile) to which they then added the variation Le Bombardier (30m, WI 6-). The report by Anna Torretta.

In mid-July I joined up with Cecilia Buil at Santiago in Chile, our plan being to climb some new routes on Marmolejo, the 6109m high mountain located at the head of Cajon del Maipo, one of the longest valleys that lead off from Santiago.

We first wanted to climb the route established in 2006 by Harry Berger and Albert Leichtfried, Senda Real, WI7, but we immediately realised that the wintery conditions, the long distances and the little time at our disposal would have rendered climbing this icefall impossible. We therefore focussed our attention on the rocky bastion that supports the Marmolejo glacier, a thousand metres lower down. From our base camp the icefalls could be reached in just a couple of hours on foot.

Although we hadn't reckoned with the high winds and storms, we were nevertheless lucky and only on three occasions were we forced back, meaning that we managed to put to good use the two weather windows we had during our 15-day stay. The icefalls face NW and on sunny days this means you have an hour before rocks and ice begin to tumble down the face. The sun hits this at 12:00 and the temperature difference is incredible, from -15°C at dawn to +15°C during the day, with a record-breaking +20°C max in the sun.

"La Gioconda" is the most obvious line, the biggest and most beautiful up the Marmolejo bastion. It splits up into two sections, both of which can be reached on foot, the first in the shade on black, extremely hard ice, while the second receives the afternoon sun and climbs porous, stalactite ice. Three days were needed to climb the 5 pitches and establish a variation start which we called "Le Bombardier", WI6-, 30m.

"Mega Couloir" on the other hand is located above Base Camp and ascends to the Marmolejo glacier, past two vertical/overhanging pitches at the end. The first part is wedged into the rock and hidden from sight, but we noticed some ice and therefore thought it would go. We ascended to the base of the couloir only after the first snowfall, and we needed two hours to do so. We soon realised that there was too much snow, that spindrift gushed down the gully a bit like water, and therefore we very reluctantly were forced to abandon our attempt. During the short trip I discovered a fantastic country and I've already got plenty of plans for the next season!