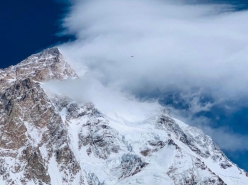 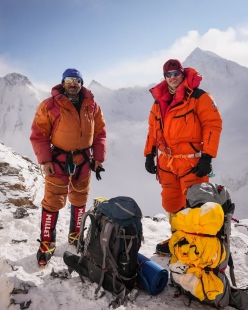 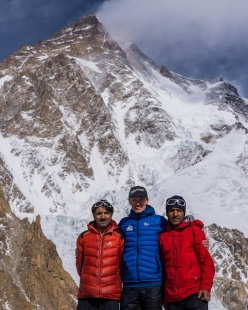 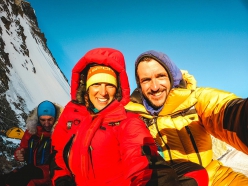 Climbers Juan Pablo Mohr, Muhammad Ali Sadpara and John Snorri are currently missing on K2. The three mountaineers were last seen engaged in their push to reach the summit of the second highest mountain in the world.


Discoraging news from Chhang Dawa Sherpa, leader of the Seven Summits expedition currently coordinating the search and rescue efforts for Ali Sadpara of Pakistan, John Snorri of Iceland and Juan Pablo Mohr of Chile, missing on K2 since Friday. Chhang Dawa Sherpa stated "Today, 2 Army helicopters (along with Saijd and I) made a search flight (with an aerial reconnaissance) for an hour up to its maximum limit: 7800m again to locate missing climbers Ali, John Snorri, and Juan Pablo Mohr in K2. The search team went through the Abruzzi and other routes, we had less weather visibility above C 4, unfortunately, no trace at all. The wind above 6400m is still 40KM."

Update at 18:30 on 06/02/2021
Seven Summits expedition leader Chhang Dawa Sherpa confirms that Sajid Ali Sadpara, son of Muhammad Ali Sadpara, has safely descended to Base Camp. Unfortunately there is no further news at present.

Update at 11:50 on 06/02/2021
The leader of the Seven Summits expedition Chhang Dawa Sherpa has stated: "Army's Helicopter made a search flight almost up to 7000m and returned back to Skardu, unfortunately, they can not trace anything. The condition up in the mountain and even at the basecamp is getting poor." In the meantime, Sajid Ali Sadpara has descended to Advanced Base Camp.

Published on Saturday 6 February 2021 at 08:55
These are very difficult hours on K2 where three climbers are feared missing, namely Juan Pablo Mohr from Chile, Muhammad Ali Sadpara from Pakistan and John Snorri Sigurjonsson from Iceland. There has been no news from the trio since yesterday when they set off on their bid to reach the summit of the second highest mountain in the world in winter. The three had been climbing together with Sajid Ali Sadpara, but Muhammad's 21-year-old son had been forced to turn back at the Bottleneck due to his oxygen regulator malfunctioning.

The Sadparas and John Snorri were among the first to reach K2 at the start of December 2020 and were obviously aiming for the historic first winter ascent, ultimately achieved by the team of 10 Nepalese climbers on 16 January 2021. This success though did nothing to dampen their desire to climb the 8611 mountain in the coldest season and after another failed attempt due to strong winds, the mountaineers set off early on 3 February, reaching Camp 2 that same day and Camp 3 at 13:00 on 4 February.

According to reports published by John Snorri's spokesperson, who cited Sajid Ali Sadpara as the source, the four climbers reached the Bottleneck on February 5 at around 10 am local time, and were climbing at a good pace. "John Snorri, Ali and J Pablo from Chile are going together for summit" was the last message, then for endless hours, all night to be precise, there was no further information.

Sajid Ali had waited at Camp 3 in the hope of seeing lights and helping if possibile, this unfortunately did not occur and an hour ago Chhang Dawa Sherpa, the leader of the Seven Summits expedition, announced that after 20 hours of waiting Sajid started his descent: "he has been up too high for too long, he will be more exhausted, and not able to help them if they return. I told 2 of the Sherpas (Temba Bhote and Phurbu Kusang) of our team (SST) to stay stand by at C I to prepare food and hot water for Sajid and also incase Sajid needs help on the way back."

Chhang Dawa Sherpa also explained that they are currently waiting for the arrival of two Pakistani army helicopters and two climbers who will attempt a search and rescue mission. "The pilot has been instructed to take the flight up as maximum as possible, it’s very low temperature and 35+ KM wind above 6500m. At the basecamp, now we have prepared oxygen bottles, high foods, masks, and regulators for 2 Pakistani climbers (HAP)."

As is well known, Muhammad Ali Sadpara completed the first winter ascent of Nanga Parbat with Simone Moro and Alex Txikon in 2016. This success came about after climbing Gasherbrum II in 2006, Nanga Parbat in both 2008 and 2009, and Gasherbrum I in 2010. Between 2017 and 2019 he successfully climbed Broad Peak, Nanga Parbat once again, K2, Lhotse, Makalu and Manaslu and, with this resumè, the 47-year-old Pakistani is considered one of the strongest and most experienced high altitude mountaineers of all. For his part, Sajid Ali Sadpara reached the summit of K2 on 25 July 2019, becoming the youngest ever to climb the Savage Mountain. Father and son form part of the expedition led by John Snorri Sigurjonsson, who climbed Lhotse in spring 2017, the K2 and Broad Peak double later that summer, and Manaslu in 2019. The Icelander had also attempted to climb K2 in winter last year but was forced to abandon his attempt at an altitude of 6600 meters.

33-year-old Chilean Juan Pablo Mohr climbed Annapurna in 2017 and Manaslu in 2018. In May 2019 he climbed the Lhotse - Everest double in just 6 days without supplementary oxygen, while in autumn that same year he summited Dhaulagiri. He traveled to K2 this winter together with Sergi Mingote and was with the Spaniard when he fell to his death on 16 February. After the initial loss, Mohr decided to continue his winter attempt together with the Italian mountaineer Tamara Lunger in Mingote’s name. Lunger for her part had abandoned her summit push and is safely at Base Camp.