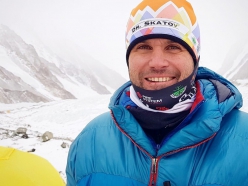 Atanas Skatov dies in a fall on K2

Bulgarian climber Atanas Skatov has died while descending from K2. The 42-year-old was attempting to climb the second highest mountain in the world in winter and had previously climbed 10 eight-thousanders.

After the tragic death of Sergi Mingote in mid-January, K2 has unfortunately proven deadly once again this winter as Bulgaria's Atanas Skatov perished earlier this morning after falling in descent close to the Japanese Camp 3.

The news of Skatov's death was announced officially by Chhang Dawa Sherpa, the expediton leader of Seven Summit Treks, who stated the following:

Friday 5 February around 10:30am our member Atanas from Bulgaria fell from the rope near Japanese C3. Atanas was climbing with his Sherpa and went a few metres ahead so the Sherpa could see it properly. While changing his safety from one rope to the other, seems some errors occurred and he fell down, we had fixed the mountain with new ropes and it’s not broken.

His body got recovered by army helicopter around 5500m 3pm the same. Sona, Pechhumbe and I went to the spot and retrieved the body. The army was extremely quick and efficient.

Atanas, a good friend of me, who climbed 10 x 8000m peak, was a very appreciated member by all other members of the expedition. Deep condolences for his family and friends. We lost great mountain friend today."

Skatov was a highly proficient mountaineer who became famous in 2014 when, reaching the summit of Everest from the North, he became the first vegan to reach the roof of the world. He developed his idea of combining mountaineering and veganism and set about climbing the highest mountains in the world, successfully summiting in the last five years Manalsu, Annapurna I, Makalu, Lhotse, Everest once again (this time from Nepal), Cho Oyu, Kangchenjunga, Gasherbrum I and II as well as Dhaulagiri.