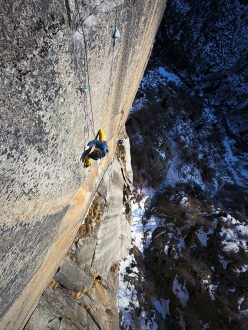 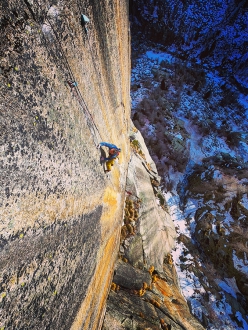 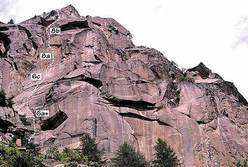 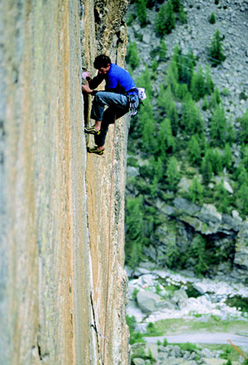 Italian alpinist Matteo Della Bordella has repeated Itaca nel Sole on the Caporal in Valle Orco. Established in 1975 by Gian Piero Motti and Guido Morello, this multi-pitch route was freed in 2003 by Cristian Brenna.

Just a few hours before departing for Patagonia, Matteo della Bordella has managed to repeat the historic Itaca nel Sole multi-pitch in Valle dell’Orco, Italy. First ascended by Gian Piero Motti and Guido Morello in June 1975, these 5 pitches ascend the smooth shield of rock on the valley’s major cliff, the Caporal. A relatively easy start leads to the main difficulties, a beautiful 8a followed by a technical 8b crackline that plunges through what is known as Itaca’s mirror. The first free ascent was carried out in 2003 by Cristian Brenna belayed by Marzio Nardi, while the first repeat was carried out in 2008 by visiting Belgian Nicolas Favresse. Last year Italy’s Federica Mingolla managed to free climb the individual pitches, but did so on separate days.

Della Bordella started trying the route three weeks ago and after 5 trips to the valley with various climbing partners pulled off the redpoint yesterday in less than optimal conditions. Della Bordella needed three attempts for the 8a pitch, and a further five for crux 8b. "The route needs no introduction and completely deserves the fame it has, climbing it free was a great feeling", the 35-year-old told planetmountain.com.

This success bodes well for Della Bordella’s upcoming project in Patagonia, namely the completion of the British Diedre route on the east face of Cerro Torre with Matteo Pasquetto and Matteo Bernasconi.

A day to remember yesterday on "Itaca nel sole" on Caporal! Despite a cold and not promising start with cloudy weather and some wet holds, I decide to commit till the very end, thanks to the support of @paolo_seimandi ... Eventually I needed 3 tries for the 8a of the mirror and 5 tries to send the following 8b crux pitch!! Great satisfaction being able to complete a free ascent of this historical route. Thanks to all my friends who supported me during these days of tries #1 and 2 by @paolo_seimandi . @karpos @kong.italy @scarpaspa @vibram @dfsportspecialist @ragnidilecco @evileye.eyewear