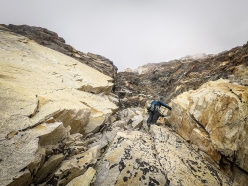 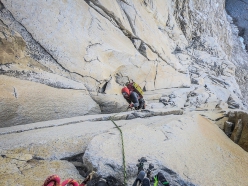 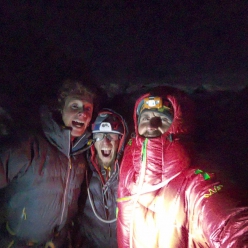 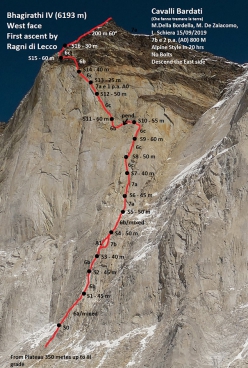 Italian mountaineer Matteo Della Bordella provides the details about the successful climbing expedition to the Garhwal Himalaya in India where with Luca Schiera and Matteo De Zaiacomo he made the first ascent of the coveted west face of Bhagirathi IV (6193m). And miraculously escaped scary rockfall a few days earlier.

September 3, 2019. Things are going for the best. Our portaledge and haulbag are already at the base of the route, and after having climbed the normal route of Bhagirathi II (6512 m) we’ve completed our acclimatisation phase. All three of us feel in fine shape and even the monsoon stopped a few days ago; the abundant rainfall that accompanied us during the the first two weeks of the expedition are nothing more than harmless low clouds that envelop us in the evening. It’s hot though, too hot and we can’t explain how come only 4 years before we’d been so freezing cold in exactly the same place and precisely the same time of year.

While I’m lost in my thoughts it’s Matteo who catches my attention: "Look! .... Teo Look!" He’s evidently alarmed and I rush out of my tent, just in time to see a spectacle that leaves me speechless: blocks the size of cars bouncing precisely down the line we’d intended on climbing the next day. They shatter into a thousand pieces and then continue tumbling downhill, covering the entire face with debris until they reach the pedestal and then the scree slope.

Ten minutes later, I'm taken aback once again as there’s an encore, and this time I get to watch it from a front row seat. Other rocks detach from the top band of shale on Bhagirathi IV, bounce downwards and channel right towards us: I watch as the debris falls down the two corners, then onto the slabs before slowing down on the pedestal.

No one dares to breathe. We’re lost for words to describe what has happened: had we been on our route just then, we would probably be dead, crushed by the huge mass of rock.

What did we do after witnessing this rockfall? Well, what anyone would have done: we didn’t start up our route and we returned to base camp empty handed, our morale lower than low.

September 14, 2019. Eleven days have passed since that moment that radically changed our expedition. In between a failed attempt up a more direct and sheltered line, perhaps too hard though: we were forced to retreat when, after three days of climbing, we reached the base of a completely blind corner. And yet we’re still here. Luca, Matteo and I, at advanced camp, fixing our line up the west face of Bhagirathi IV.

And to think that only two days earlier we’d brought down all our gear and stated that we’d finished our expedition. But then that night an idea, possibly insane, started to creep into my mind, rooting itself in the depths of my unconsciousness, so much so that it kept me awake as I thought of every minute detail, of every possible scenario that we might face, of what gear would be fundamental and what would be superfluous. When I shared my thoughts with my climbing partners I didn't know what to expect... would they tell me to get lost or find it brilliant?"Guys, let’s give in one more go, a fast ascent. In a day, with nothing but the bare minimum. It seems impossible, but we might as well give it a try."

We set off at midnight from our ABC at 5,000 meters. At 3am, guided by the light our head torches and battling against ten degrees below zero (in the meantime the temperature has finally dropped) Luca takes the lead. After 6 long pitches it’s my turn: the climbing sucks, is nothing like it was 4 years ago. Or rather, what would have been beautiful vertical and overhanging 6c/7a cracks are now covered and clogged up in dust and debris from the rockfall.

The only positive thing is that I don't feel the effects of being at 5,900 meters, I feel like I'm climbing on Grand Capucin and the altitude isn’t giving me too much cause for concern. After 10 pitches a 60 meter traverse awaits us, where I bid farewell to my ultralight Camalot #2, a sacrifice needed to make a pendulum that allows us to save some precious minutes.

By now we’re away from the rockfall area, the rock is clean once again. However, we’re now chossy terrain, formed by huge unstable blocks. Matteo follows quickly with the heavy haulbag. A few more pitches and I hand over the lead to Luca for the icing on the cake: two pitches through the layers of friable shale that have made these mountains famous. He manages to climb the first in the last light, fortunately finding a vein of granite, while he deals with the second pitch in the dark. Now there’s snow: we have a pair of crampons between the three of us, but never mind. I take the lead and, armed with patience, try and find a way upwards before making decent belays for my partners to follow on jumar.

At 23:00pm we all stand on the 6193 meters summit. We then rest for a couple of hours in our sleeping bags, then begin the descent down the east face.