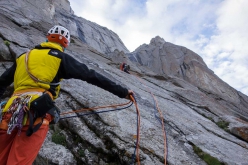 Climbing the first routes in the Tagas Valley, Karakorum
Photo by Jean-Louis Wertz 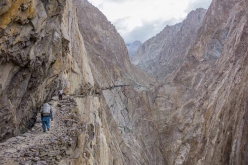 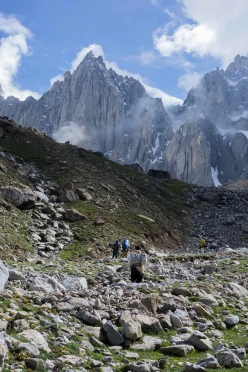 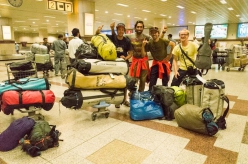 On 6 August 2018 French mountaineer Mathieu Maynadier was hit by rockfall while on an climbing expedition in the Thagas Valley in Pakistan’s Karakorum with Nicolas Favresse, Carlos Molina and Jean-Louis Wertz. Maynadier was taken to Skardu military hospital by helicopter where his condition is far better than initially feared. He will be repatriated to France this week.

"More worries than injuries: concussion and a battred arm. I should be repatriated at the end of the week." With this short text message sent to the newspaper Le Dauphine French mountain guide Mathieu Maynadier put an end to his August 6 climbing accident in the Thagas Valley in tvhe Karakorum (Pakistan).

Maynadier had traveled to Pakistan with Belgium’s Nicolas Favresse, Argentina’s Carlos Molina and Belgian photographer Jean-Louis Wertz in order to climb virgin peaks in the unexplored Tagas Valley. The four reached the valley at the end of July after a two-day approach with 28 porters and established base camp at 4900 meters just below a very impressive pillar. "It feels incredibly special to be the first foreigners to enter this valley and set our eyes of climbers on its mountains" wrote Favresse in an email on 31 July.

The accident occurred on the 5th day of establishing a new climb, during the descent after the team had successfully reached the summit. The climbers were abseiling when the Frenchman was hit by rocks at 5500 meters.

In an email to planetmountain.com Perrine Vangilve, who is coordinating the expedition communication, wrote: "The guys were scared because they found Maynadier hanging on the end of his rope, unconscious and full of blood. So there was obviously a little panic."After the initial fright Maynadier regained consciousness and, helped by his climbing partners, managed to descend to the base of the wall. He was airlifted to Skardu military hospital from where he received the good news about his conditions. He will return to France this week.

34 year-old Maynadier is one of France's leading young alpinists. In 2010 the Briançon guide made the first ascent of Lunag II (6830m) in Nepal together with Max Belleville, Mathieu Detrae and Seb Ratel, an ascent which received a nomination for the Piolet d'Or 2011. In 2012 he established a new route on Latok II with Antoine Bletton, Pierre Labbre and Sebastien Ratel, in 2013 he made the first ascent of the South Face of Gauri Shankar in Nepal with Mathieu Détrie, Pierre Labbre and Jérôme Para, while in 2015 he teamed up with Mathieu Détrie, Julien Dusserre and Pierre Labbre to forge a new route up Mount Dazampa Tse in Nepal.