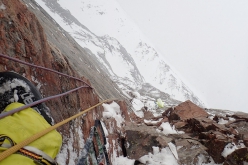 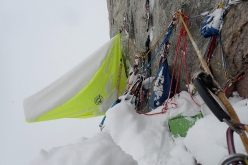 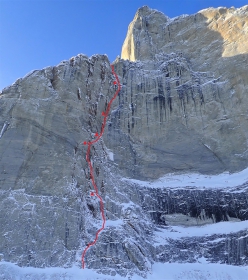 From 17 April to 21 May 2022 Polish mountaineer Marek Raganowicz climbed a new route solo on Polar Sun Arm, the huge buttress that guards Polar Sun Spire on Baffin Island in Canada. MikroKozmik Variations was climbed over 35 days past difficulties up to VII, A4+, M5 and, after 15 pitches, joins Superbalance for a further 11 pitches.

A decade after his ground-breaking first ascent of Superbalance on the North Face of Polar Sun Spire with Marcin Tomaszewski, Polish mountaineer Marek Raganowicz has now returned to the same peak in remote Sam Ford Fiord area on Baffin Island to take things one stage further with his 35-day solo first ascent of MikroKozmik Variations.

The new route climbs the huge north facing-buttress that guards Polar Sun Spire called Polar Sun Arm, and initially takes an independent line to the left of Superbalance. After reaching the base of the mountain, between the 1st and 12th of April Raganowicz spent 7 days fixing the lower section of the route before committing to the ascent on 17 April in extremely inhospitable conditions. Over the next 35 days Raganowicz climbed the 620m wall via 15 pitches with the use of 2 portaledge camps, and then joined Superbalance for another 11 pitches (442m) and 3 camps to end his ascent on the top Polar Sun Arm.

Raganowicz, who on his own and without a satellite phone spent a total of 59 days in the remote area Sam Ford Fiord area, described the climbing as follows "Many pitches climb some sections with excessively rotten rock and loose blocks, that forced me to be extremely careful and accept a higher level of a risk. On the first 15 pitches I drilled only 2 belay bolts. All the other belays were naturally built, which makes the style better but at the same time the hauling and solo belaying are very uncomfortable and more risky when loaded during a fall."

Conditions were, as mentioned, extreme with temperatures well below zero. Raganowicz explained "In the first weeks of the trip temps were -30°C, -35°C. The temps on the wall were lower by about 5 – 10 degrees, but some corners, chimneys and cracks were even colder. During my days on the wall the temps in the portaledge, before I started to cook were -20°C to -25°C. The highest temperature I registered in the portaledge was -5°C."

Raganowicz’s most recent solo is an extraordinary achievement and the technical grade put forward of VII, A4+, M5 certainly does not do justice to his endeavour. The succinct words of the 60-year-old perhaps best describe this profound experience "this was the climb of my lifetime. My hardest route, the hardest conditions, my most dangerous climb of all."