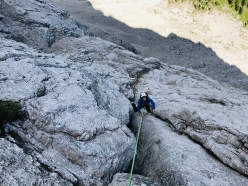 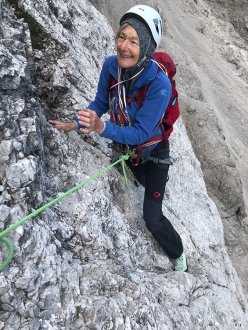 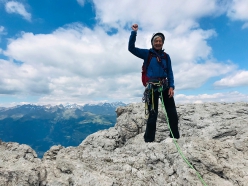 Christine Regoutz on the summit of Laserz, Lienz Dolomites aged 70 after having repeated Direkte Laserz-Nordwand
Photo by Lisi Steurer 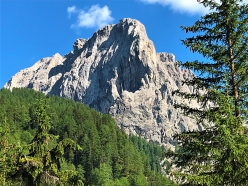 On 5 August 1939 the North Face of Laserz in the Lienz Dolomites, Austria was climbed by Gustl Thaler and Gerald Leinweber. Mountain guide Lisi Steurer reports about this historic first ascent 80 years ago and her recent repeat with Christine Regoutz, her rather special client. And not only because she happens to be 70 years old.

"Geographically and - as far as its fame is concerned - the Lienz Dolomites lie far removed from the classic Dolomite groups such as the Drei Zinnen, Rosengarten and the Brenta Dolomites." This is how Walter Pause described this mountain range in his classic 1970’s book "Im extremen Fels". Nearly 50 years have passed and not much has changed since then. The climbs on the Laserz north face are still somewhat wild and rarely repeated.

The Direkte Laserz-Nordwand, 600m, V+ was first climbed on 5 August 1939 by Gustl Thaler and Gerald Leinweber. Almost 80 years to the day I find myself at the base of the route with my client Christine Regoutz. It’s 6 in the morning and the sun's rays warm the cold rock on this north face.

I have already climbed some routes with Christine in the past, including some well-known Dolomite classics. As an annual ritual at the start of each new season we try to choose a "big route" of the year. This year is special though: Christine is 70. She doesn’t want to make too much a fuss of it though because, in her words, "I don’t feel any different to when I was 60.". Her looks confirms this.

The wiry mountaineer has been climbing for more than 50 years and has already climbed some great alpine routes. Nevertheless, for her birthday we planned on doing something special. Tre Cime di Lavaredo, Marmolada, Civetta... There were many famous climbs to choose from!

After giving it some careful consideration, I suggested Direkte Laserz-Nordwand in the Lienz Dolomites. Not because it’s famous climb, nor because it’s in a particularly famous mountain range. No, the names are not so important. Christine is more concerned with the much cited "experience".

She immediately agreed and as we finally start up the route it seems as if we’re celebrating her 70th in a suitable ambience: damp, repulsive starting pitches, delicate traverses with marginal gear, then some brilliant cracks past sparse protection.

Christine is in seventh heaven and I'm happy for her! Together we simul-climb (in order to be a bit faster) along the easier pitches on the upper section of the route, until we reach the summit of Große Laserzwand at noon. Does anyone even know of this mountain? We don't care. What counts is the experience - even at a ripe old age!

Thankful and relieved after having reached the top of our successful adventure, we descend to valley thinking about our next experience together...

01.08.2018
Cima Grande di Lavaredo, Reiner Kauschke at 80 reclimbs his Superdirectissima
Accompanied by mountain guide Christoph Hainz, Reiner Kauschke has repeated Superdirectissima up the North Face of Cima Grande di Lavaredo in the Dolomites. Kauschke had made the first ascent of the ‘Saxon Route' with Peter Siegert and Gert Uhner in 1963 and now he repeated the line in 17 hours at the extraordinary age of 80.

16.09.2014
Ohne Rauch stirbst du auch, Cima Grande di Lavaredo: Ines Papert and Lisi Steurer climb free in the Dolomites
On 17/08/2014 German alpinist Ines Papert made the first one day ascent of Ohne Rauch stirbst du auch 8a, a route established in 2010 by Hannes Pfeifhofer and Daniel Roger. The second free ascent was carried out by Austria's Lisi Steurer on 28/08/2014.