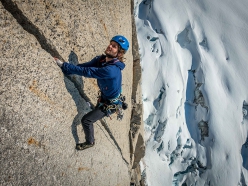 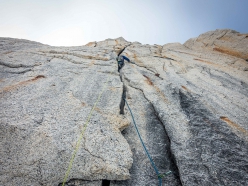 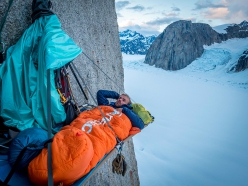 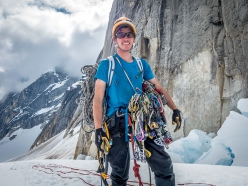 Daniel Joll, Kim Ladiges, Alastair McDowell and John Price have made the first ascent of King Cobra (550m, 5.11), a 350m variation to the famous Cobra Pillar on the East Face of Mount Barrill (2332m) in the Ruth Gorge, Alaska.

A group of alpinists from New Zealand comprised of Daniel Joll, Kim Ladiges and Alastair McDowell teamed up with climber and photographer John Price from Australia to add an interesting variation to the famous Cobra Pillar up the East Face of Mount Barrill (2332m) in the Ruth Gorge area of Alaska.

The team had originally intended on climbing on the Kichatna Spires but the poor weather in this area lived up to its reputation and after a week the group flew to the nearby Ruth Gorge. Making the most of the eternal daylight of a high Alaskan summer they started climbing a new line to the right of the Cobra Pillar which takes the obvious central line of the granite peak, but their attempt ground to a halt after 3 days of effort when McDowell and Price were hit by an avalanche of slush on the face.

Keen on climbing a safer line and without a topo, they turned their attention to what they believed was the Cobra Pillar, first ascended by Jim Donini and Jack Tackle in 1991 and freed by Ryan Nelson and Jared Odgen in 2005. After starting up the obvious line they realised they were actually on Cobra Pillar but, determined to leave their mark, they broke off right after the third pitch. What followed was "brilliant granite crack climbing including some awesome splitter offwidths" through circa 350 meters of virgin terrain, before joining up with Cobra Pillar once again and following this for another three pitches to reach the top of the Pillar before continuing on to the summit.

All belays were re-equipped with fresh cord and/or bolts and, commenting after their ascent, McDowell stated "The Alaskan Range is an amazing place to climb with its sheer walls and endless summer daylight, but we never expected to find so much quality free climbing. The route is now freshly cleaned and equipped with belays, and still coming into prime season. If you're looking for an alpine rock climbing objective this summer we highly recommend checking this one out!"