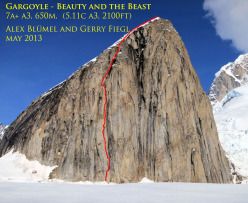 The route line of Beauty and the Beast (7a+ 650m A3, Alex Bluemel, Gerry Fiegl) Mt. Gargoyle, Alaska
Photo by © Bluemel / Fiegl 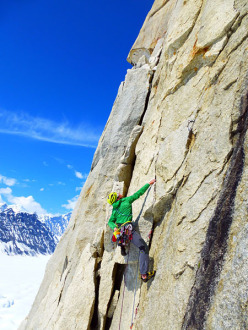 Beauty and the Beast, first ascent on Alaska's Gargoyle

In Alaska's Ruth Gorge the Austrians Alex Bluemel and Gerry Fiegl have made the first ascent of Beauty and the Beast (7a+ 650m A3) on the Gargoyle. Shortly afterwards the two Tyrolean mountaineers made the first repeat of the long Tooth Traverse. Gerry Fiegl provides the report.

We left Talkeetna May 19, 2013 after the last big storm deposited a couple of centimeters of fresh snow even in Anchorage, and we therefore landed in a Ruth Gorge packed with snow. The locals had told us about a great ice climbing season so we thought we'd have to start by looking for some good ice lines.

When we arrived,however, an exceptional high pressure system formed bringing with it higher temperatures. From a meteorological point of view it was all wonderful, but the mountains soon began to shake off their winter garb, sometimes in a truly frightful manner.

"But if the weather in Alaska is this beautiful, surely we mustn't waste a minute of time, we've got to pack our rucksacks and get out and try something" was what we thought. Alone on the glacier and without any information about the prevailing route conditions, our first week proved difficult and was marked by setbacks and failed attempts due to falling ice and avalanches.

"Winter is finally over but summer is still far away" was what we concluded, but since the weather continued to remain stable we decided to give things another go. A line of cracks and corners looked promising and after a couple of failed attempts we finally got lucky. On 29 May we reached the top of Gargoyle after two days of climbing and a bivouac just above half-height. Happy with our new route, we nevertheless returned after a rest day to free three pitches on the lower section we'd previously breached using aid. So only one pitch now remains to be freed: a spicy combination of friable rock, snow up above, wet rock and a little pro up 30m of A3. A psychological game. In all likelihood the battle up this pitch won't be much more pleasant even with dry rock...

We quickly came up with a name for the route because the "Beast" is the pitch I've just described, while lower down there was the "Beauty" pitch, a 40m trad crack, with small roofs, flakes, etc. Perfect rock quality, beautiful to climb and a rarity in the Ruth Gorge as we realised during our stay. For the record, we only left one bolt on the aid-pitch and a handful of pegs in-situ.

Although there are certainly places which offer better rock quality, right from the outset Austrian alpinists have played an important role in the history and development of climbing at Ruth Gorge. Andi Orgler and his climbing partners deserve a special mention, for having made the first ascents up famous mountains such as "The Winebottle" on Mt Dickey and "The Pearl" on Mt Bradley.

After two weeks of great weather the incredible high pressure system gave way to some bad weather. Tent time and time to socialise with our neighbors Freddie Wilkinson, Renan Ozturk and Alex Honnold. The first two know this area extremely well since they come almost every year. "Too early for rock climbing and too late for ice climbing!" was their comment. Which left us with ridges and when the Americans told us about their latest adventure, we immediately knew what we wanted to do: try the Tooth Traverse. This circa 8 km ridge connects six impressive peaks above the Ruth Gorge and was completed for the first time ever, after several failed attempts, only last year by Freddie and Renan.

The high pressure system returned and we started out on 6 June at 22:00 toawards "Sugar Tooth", which we summited via the south ridge at noon the next day. After a short rest two abseils down "Talkeetna Standard" by Jeff Hollenbaugh and Steve House took us towards Eye Tooth. After 24 hours of non-stop we were happy with our first bivy located almost below the Eye Tooth summit. From here and in 12 hours we ascended the ridge to summit "Bear Tooth", where we made our second bivy. The third day was long: 6 abseils down the "Russian Route" took us from Bear Tooth to below the south face of "Mooses Tooth" which we summited at 22:00, after about 14 hours via the route "Swamp Donkey." We still had to descend via the west ridge which, due to the large cornices and steep slopes, proved more difficult than expected and required full concentration once again.

Overjoyed to have repeated the "Tooth Traverse" just a year after the first ascent, we returned to base camp on 10 July at 9:00am, after a total of 83 hours on the go. A special thanks to Freddie and Renan for having inspired us to try the Tooth Traverse and for all the excellent route information.

Thanks to:
Salewa, Dynafit and adidas eyewear