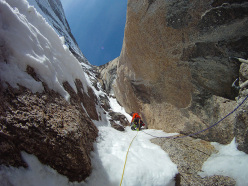 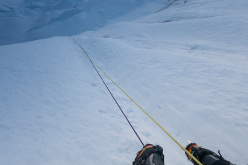 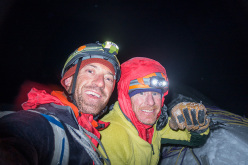 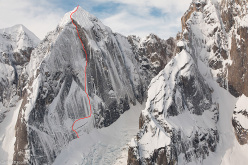 Stairway to Heaven, new route on Mt. Johnson in Alaska

From 1 - 4 May 2014 Ryan Jennings and Kevin Cooper made the first ascent of Stairway to Heaven up the North Face of Mt. Johnson, Ruth Gorge, Alaska

American climbers Ryan Jennings and Kevin Cooper have made an important ascent up the North Face of Mt. Johnson, hailed as one of the major unsolved problems in Alaska. The duo climbed a line to the left of the only other route on the North Face, “The Elevator Shaft", put up by Jack Tackle and Doug Chabot in 1995 and while this route had been attempted previously, there are no recorded attempts of the direct North Face except for those by the late Andreas Orgler from Austria who is believed to have attempted the mountain in summer. Known for his no-compromise approach against an overuse of bolts and pegs, Orgler is said to have climbed into a position that left him with no other option other than to drill a hole to place a copperhead to facilitate retreat. According to reports, the Austrian always vowed to return to remove the copperhead. His leave no trace ethic was shared by the late Mugs Stumps and this belief of following natural, beautiful, clean lines offered by the mountain is what prompted Jennings and Cooper to apply for the Mugs Stump climbing grant which they used to travel to the Ruth Gorge this year.

Their first trip to attempt Mt Johnson had ended in nigh disaster in 2003; during the descent off their "warm-up" route, “Shaken not Stirred" on the Mooses Tooth, they miraculously survived an rappel anchor breaking and returned home without even setting foot on Mt. Johnson's North Face. "Since then the line has haunted our dreams and I often I felt I would have left something out of life if I never gave it an attempt." explained Jennings, adding "The idea that the Ruth Gorge was a heavily travelled area and that we may prefer something more remote never entered our minds. We have been looking at this route for 19 years and had to give it a go in our lifetimes. Beautiful lines such as this are rare to find and we are only motivated to pursue something so risky by beautiful lines on beautiful mountains. We are both married with children, Kevin age 47 and I age 40. Attempting to climb arguably dangerous routes weighs heavily on balancing the needs of a family with the desires or our dreams. We may likely never find another mountain as attractive and therefore, in our minds, worthy of the risk required."

The risk the two faced was not insignificant: the duo confronted difficulties up to Alaska 6, A1, M6, WI4, AI5+ and X rated protection, the most runout and dangerous on the scale. 81 hours were needed in total from camp to camp to breach the monolithic granite devoid of cracks but the first problem they encountered was finding a way through the large serac field that guards the approach. They breached this on the left and then traversed across the base, all the way to the Elevator Shaft route searching for possible line of ascent and only on their return did they find a feasible line: a leftwards treading line beneath a great roof. Conditions seemed ideal: the face was covered in névé and the upper corner contained a vein of ice most of the way, prompting Tackle who was camped nearby to state that conditions were among the best he had ever seen. After a day of rest the two climbed the first pitch, then abseiled back down for another day of rest before climbing a second pitch and abseiling down. They were now poised to launch upwards and after a false start - a day was spent, thankfully unnecessarily, rescuing a parties dropped headlamp nearby - they finally launched upwards on 1 May.

Setting off at 3:30 am Jennings and Cooper negotiated the approach and jugged up the fixed ropes to reach the previous highpoint. A long traverse right led across the hanging snow field and after waiting for temperature to cool, Jennings started up the “Neve Highway". The two simul-climbed and basically soloed the next mammoth 700 foot pitch, a psychologically demanding, runout AI5 with no protection beyond the first 30m. With “frazzled nerves" they then continued simul-soloing an even more demanding, 500 foot pitch of AI5+. As darkness set in, Cooper then led through another long WI4 section and after more simul climbing eventually found a small bivi spot at the base of the rock corner where they dug two platforms and settled in for the night at 3am.

They awoke at dawn bathed in sun and the next day was spent fighting up a series of tricky rock chimneys and tenuous ice. After some sporadic rests they climbed well into the night to finally stumble across a cave which offered a much needed bivi. "I have never been so delighted. The hour was late and sleep was much needed. We had been on the go for 40+ hrs with only a few of sleep" explained Jennings. The two dropped off to sleep as the sun rose and rested little at their "Hideaway bivi" since the heat of the sun began to melt the ice and the two realized that either they move immediately, or wait half a day for cooler temperatures with the possibility of the pitch melting out entirely. They opted to continue and Jennings launched upwards into the third day of their climb, up melting névé to then climb another pitch of crumbly rock. Another two difficult pitches, one of which required A1 aid, gave access to the ridge. This proved trickier then they had thought and after traversing out onto the East Face they eventually returned to the ridge while watching "the most magnificent sight of the entire journey. Everything had been so synchronistic to this point it seemed so fitting as to be granted a view of the Northern lights on the summit push. Our dreams were coming true, the stars had aligned, the heavens had shined down and we were on our way to the summit. I shed a brief tear and continued on."

The duo reached the summit at 4:20am and Jennings stated "19 years in the making had come to fruition. We stood atop our dreams after only giving ourselves a 5% chance in hell. Everything that led up to this moment seemed destined. I’ve never felt so connected to fate. A storm was brewing to the West and the wind was cold. We took the mandatory summit photos and I began down the South Ridge. After 100’ I turned and snapped a few more photos showing my tracks leading back alongside the rope to Kevin's headlamp shining from the highest point. I then turned and headed down. After 10 minutes I met up with the Chicas (Kim Hall and Jewel Lund, who had ascended the Escalator route days earlier, Ed) tracks and felt a sense of relief knowing someone had been here before and that we were on our way home." The descent, though long, proved uneventful and they eventually returned to their camp, 81 hours after having set off. A few days later a storm engulfed the area for the next two days.

Commenting on their success, Jennigs concluded "Conditions on the wall were exactly what we had hoped for although more protection would have been appreciated. We did come prepared to run it out and possibly simul-climb long stretches on névé but I don’t believe either of us truly understood the length these pitches would extend to. After the climb we agreed our training on choss rock in Redstone CO over the years was invaluable on the bad rock sections as was our training linking multiple big ice routes in the Ouray/Telluride region in years past. Our thin ice ascent of the Window pain on Longs Peak this year gave us the confidence to climb non protected AI5+ since the picks felt so bomber and our 20+ years of climbing together gave us the trust in our partner required to simul climb hundreds of feet with no protection between us. I never once thought about my partner falling during the Névé Highway pitches and that takes a strong partnership with a lot of trust."

“During this trip we often spoke of and to the spirits of Orgler and Mugs to help guide us through a clean, light and fast ascent. In the end the beauty of the line, more than anything, and perhaps it’s absence from historical mention intrigued us enough to build the required skills we believed may present us with the possibility of completing an ascent. Our ideals, built on the foundations of climbers such as Mugs, Orgler, Tackle and our own local hero Michael Kennedy among others, helped us to attain the Mugs Stump Award and in turn to make the journey to attempt this beautiful line which financially would have been impossible without the help of the generous donors to the Award who we will be forever grateful too."