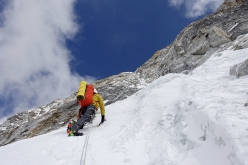 Paul Ramsden making the first ascent of The Phantom Line on the north face of Jugal Spire, Nepal
Photo by Paul Ramsden archive 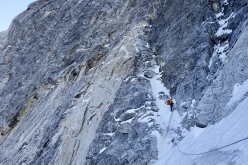 Paul Ramsden and Tim Miller making the first ascent of The Phantom Line on the north face of Jugal Spire, Nepal
Photo by Paul Ramsden archive 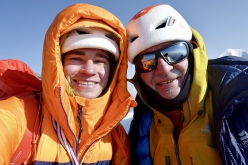 Tim Miller and Paul Ramsden on the summit of what they have called Jugal Spire in Nepal on 28/04/2022. The mountain was climbed via the north face up a route christened The Phantom Line
Photo by Paul Ramsden archive 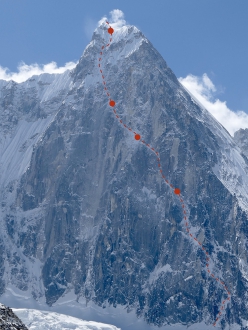 The Phantom Line on the north face of Jugal Spire, Nepal, first ascended by Paul Ramsden and Tim Miller from 21-29/04/2022. The pair summited on the 28th and descended via the south face. The mountain previously was unnamed and unclimbed
Photo by Paul Ramsden archive

Interview with British mountaineer Paul Ramsden who with Tim Miller completed an alpine style first ascent of The Phantom Line (1200m, ED+) up the north face of a previously unclimbed and unnamed 6563m peak now called Jugal Spire in the Jugal Himal region of Nepal

From 21- 29 April 2022 British mountaineers Tim Miller and Paul Ramsden established a new route up a previously unclimbed and unnamed 6563m peak in the Jugal Himal area of Nepal, close to the country’s busy capital Kathmandu. The major new route was climbed alpine style over five days via a diagonal ramp of ice that crosses the compact granite wall, plus a further day spent descending the unexplored south face. The mountain has been christened Jugal Spire while the 37-pitch outing has been called The Phantom Line due, as Ramsden explains "to its ability to appear and disappear when viewed under different light and weather conditions." Ramsden, who has amassed over 30 expeditions to the Greater Ranges and has garnered a staggering four Piolet d’Or with habitual climbing partner Mick Fowler, provides some details.

Congratulations Paul for this new route with Tim! How did you first find out about this mountain?
The mountain was found by spending too much time on Google Earth during the Covid lockdowns. I was struck by the steepness of the face, which is unusual for Nepal and by the fact it appeared to have gone ignored previously.

It’s even close to Kathmandu. Any thoughts about why the area is rarely visited?
I can’t really answer why people don’t go to the Jugal Himal. It's very close to Kathmandu but lacks famous trekking routes and has no 8000m peaks to attract the tourists.

What were your thoughts when you first set eyes on that ramp line?
We couldn’t really believe it to be honest, it was in such an outrageous position. I really wasn’t sure that it would go, mainly due to the blank section in the middle.

The line certainly is striking. Is this what you planned all along?
We had no firm plan. We knew there was a big face and hoped to climb it by any route.

First of all though you had to acclimatise
We spent about 10 days acclimatising on nearby peaks. Mainly the West ridge off Dorje Lhakpa, though we didn’t summit.

So what about the actual ascent
We were away from base camp 21-29/04/22. The climbing was very exposed on mainly thin ice and snow. The face offers lots of rock climbing potential but for a mixed route there was only really one obvious way to go. Basically there shouldn’t really be an ice route on a rock face like this. The route is graded ED+, I don’t really do more complex grading.

You made 4 bivies during the ascent.
The bivis varied enormously. The first one was flat under a perfect overhang. The second one was in an avalanche runnel and destroyed the tent, leaving a big hole in the top. The fourth one just below the summit was in a natural rock cave, which was really cool.

Does anything else stand out?
The most memorable section was a series of squeeze chimneys in the centre of the face. Basically we climbed inside the rock for about 100m which linked up the lower and upper sections of ice. This section was a sack hauling nightmare but if the chimneys were not there, the route would have been impossible. The most memorable moment was when Tim’s crampon fell off and landed in the snow near me, it was incredibly lucky!

Wow. Yes. So when did you reach the top?
We summited on the 28/04/22. After two years of Covid, being on a summit felt very exciting. Travel from the UK has been more restricted than the rest of Europe, so it felt really good. It was actually my first summit since 2016.

How did you then get off the mountain?
The descent was down the south side on relatively easy ground rappelling from Abalakov anchors.

Dd you make one more bivy during the descent therefore?
We spent two short days getting to the foot of the route due to glacier conditions and avoiding the sun. And yes, we also had another night out on the decent, or rather, after the descent on the walk back to BC.

Presumably no bolts Paul… Was any gear left in-situ?
I will try and not take offence ;-) We take not carrying bolts very seriously, it would never happen! One piton and a wire was left in situ as we couldn’t get them out.

Usually you climb with Mick Fowler. On this expedition you climbed Tim
I met Tim through my involvement in mentoring young alpinists who want to get into expedition climbing. Originally we were going to have a bigger team, Covid etc thinned the group to just me and Tim.

So how would you rate Phantom Line compared to previous ascents?
I thought it was one of the best lines I have ever climbed. Aesthetically it is hard to beat.

Paul wishes to thank the Mount Everest Foundation, Alpine Club and British Mountaineering Council for the funding, and his sponsor Mountain Equipment and Boreal.

14.03.2014
The scariest road in India
Video of the journey along the incredible road that leads Kishtwar Kailash, the mountain first climbed by Mick Fowler and Paul Ramsden in October 2013.

16.11.2012
Mick Fowler and the ascent of Prow of Shiva
A short interview with British mountaineer Mick Fowler who, together with Paul Ramsden, climbed the stunning new route Prow of Shiva ED+ up Mt. Shiva (6,142m), India.

05.11.2012
Striking Shiva success for Fowler and Ramsden
In October 2012 British alpinists Mick Fowler and Paul Ramsden made the first ascent of Prow of Shiva ED+ up Mt. Shiva (6,142m), India.