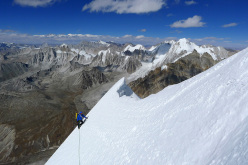 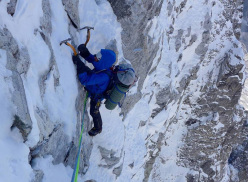 Gave Ding, the photos of Mick Fowler and Paul Ramsden climbing in Nepal

The photos and short climbing report about Gave Ding, the 6571m peak in the Nepalese Himalaya first climbed in October by British mountaineers Mick Fowler and Paul Ramsden.

On 22 October British mountaineers Mick Fowler (59) and Paul Paul Ramsden (46) reached the summit of the hitherto unclimbed mountain Gave Ding in Nepal, after having breached the north face alpine style over a period of 5 days. Published below are the details provided by Ramsden about this impressive ascent, supported as so often by their close friends Steve Burns and Ian Cartwright. As we wrote in our original October report, Gave Ding is the latest in long line of successes for this tried and tested British duo, whose outstanding contribution to mountaineering has netted them two Piolet d’Or, the first in 2002 for their ascent of the Central Couloir of Mt Siguniang and the second in 2013 for their ascent of Mt. Shiva in India.

The east and west sides of the north face were threatened by avalanches slopes and serac bands, leaving only one feasible line, pretty much up the centre of the north buttress. The lower section had a lot of steep mixed climbing (wore two teeth of my ice axe picks!) and was quite complex, weaving a route through overhangings and up grooves. A bit reminiscent of the Eiger in the complexity of the route finding. The upper third was more a of a classic steep ridge line, similar to the Peuterey.

The conditions were unusually cold for this time of year and we both suffered minor cold injuries. The route required five days in ascent and two in descent, initially down the south ridge and then down a coloir on the north side (25 Abalakovs). Overall it was a real pleasure to climb a virgin summit, via a hard route that offered the only feasible line of ascent from the north side. Grade ED+ 1600m.