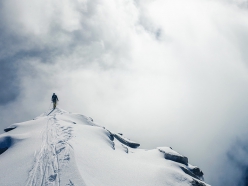 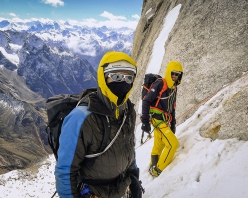 Much Mayr, Max Berger, Guido Unterwurzacher and Hansjörg Auer on the summit of a previously unclimbed 6050m mountain in the Indian Himalaya on 5/10/2018
Photo by archive Auer, Berger, Mayr, Unterwurzacher 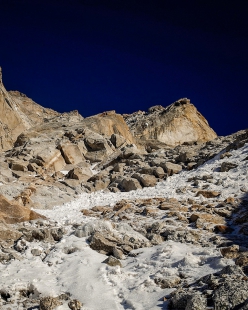 Alpinists Hansjörg Auer, Max Berger, Much Mayr and Guido Unterwurzacher from Austria have made a three-day alpine style ascent of a previously unclimbed 6050m peak in the Kinnaur district in the Indian Himalaya.

After acclimatising and waiting for the suitable weather window, the four spent two days ascending the mountain’s Southeast Face, breaching “beautiful mixed terrain" described as being "not too hard” and bivying at 4400m and at 5000m. They reached the summit at circa 9.45am on Friday 5th October and then abseiled down the the same route, returning safely to base camp at circa 3200m later on the third day.

This is Auer's second high altitude success this year; in July he pulled off a remarkable solo first ascent of the West Face of Lupghar Sar West in the Karakorum, Pakistan.

Expedition We climbed the Southeast Face of the “Unknown Peak” (about 6.050 m) in the Northern India. We did it within three days starting from the valley. Great alpine style adventure with good friends. Check my Stories for more. Thanks to my friends! #neverstopexploring : Indian Himalaya : India

28.01.2010
Hansjörg Auer and Much Mayr add new route to Torres del Paine, Patagonia
Hansjörg Auer and Much Mayr have recently returned from their trip to Patagonia where despite terrible weather conditions they managed to forge "Waiting for Godot" (750m, 7b) along the East Face of Central Tower to the Col which separates the Central and North Tower.