Hansjörg Auer and Much Mayr making the first ascent of Mount Reaper in Alaska
Photo by Hansjörg Auer, Much Mayr

Hansjörg Auer and Much Mayr making the first ascent of Mount Reaper in Alaska
Photo by Hansjörg Auer, Much Mayr 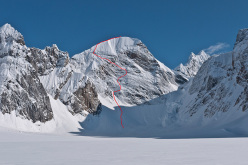 Austrian alpinists Hansjörg Auer and Much Mayr have had a remarkable trip to Alaska where they succeeded in making a fast ascent of a mountain in the Neacola Range believed to have been previously both unclimbed and unnamed. The peak in question is located on the Pitchfork glacier, between Mt. Citadel and Mt. Berserker and the name put forward by Auer and Mayr is Mt. Reaper.

The duo flew in from Anchorage on 11 May and after identifying a feasible line up the North Face they climbed their Sugar Man in a 12 hour roundtrip on 17 May. They setting off at 4am summiting at approximately 13:30 before making a "super fast and problem free" descent down the West Ridge to return to base camp at 16:00.

Auer explained: “We had some pretty unstable weather (this range is well known for that) and we had only one day of blue sky. Furthermore, temperatures were higher than we expected, so our objective seemed kind of tricky but nevertheless we decided to give it a go. That´s the reason why we chose to climb in less than ideal weather, to avide higher temperatures, and that’s why we tried to be super light in order to be as fast as possible. In the end we did it in a 12 hour push from camp to summit and back, staying on top for less than 5 minutes because heavy clouds were coming in.

We had lot’s of spindrift due to strong winds higher up and encountered some really challenging steep pitches with bad protection, in particular the crux where a fall was out of the question. Some belays were made using only our ice axes and the ice, only just plastered to the blank granite, really couldn’t have been any thinner otherwise our alpine style attempt would have ground to a halt. In the end though we got lucky."

This was Auer’s first visit to Alaska and Mayr’s second after having guided on Denali - Mt. McKinley last year.