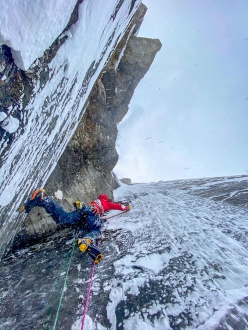 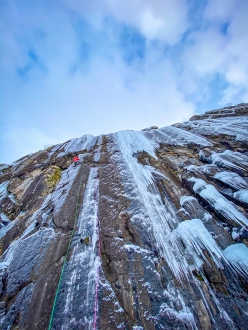 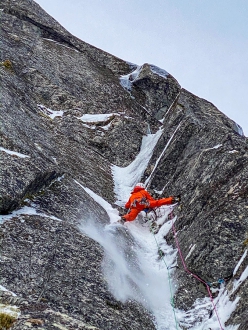 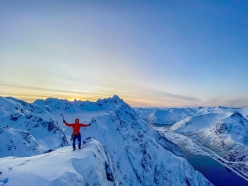 Scottish mountaineer Greg Boswell reports about his winter climbing trip with France's Jeff Mercier to the Lofoten area in Norway which resulted in a series of new ice and mixed climbs.

Between the 27th of January and the 8th of February Jeff Mercier and I went back above the Arctic Circle, in the north of Norway where we had 11 days available to climb as much as possible. It was a Rab Equipment trip with a goal to test some new gear, get some cool photos and obviously climb loads and put the kit through its paces as much as possible! All of which I think we managed to do pretty well.

We wanted to return to this part of Norway after we both had a successful visit to Senja Island a couple of years back, where we managed a very productive trip with the limited time we had. The potential for new winter climbs in this part of the world is unbelievable. Whether it is a small one pitch testpiece or a big unclimbed alpine face, if you have the vision and the will to try, the possibilities are endless.

This year we started our trip in the Lofoten area. As usual we used our arrival day to do lots of recon and driving, to get as many potential objectives as possible lined up for the following days. We ended up climbing in Lofoten for the first 6 days of the trip and then due to lots of snowfall and dangerous conditions we opted to head inland and North, to around the Tennevoll area for our remaining days. Over the trip we managed to open a handful of new lines across both areas, all of which were of the highest quality and not easily won!

Our first new route was on day one, where we opted for an icy corner line that lead to a large capping roof. Then things got tricky as we moved onto thin ice above. The first two pitches were very involved, with the second pitch being the crux. This pitch was hard at the start with poor gear below the roof and then it kicked into overdrive with steep moves and bold climbing to reach the wafer thin ice. Eventually the ice got better and the third pitch was a pleasure of bomber ice and fun climbing. It was easier to give this a Scottish grade as the traditional style of the climbing was similar to what I see at home. We opted for around IX,10 as it was bold and hard with a lot of unknown thrown in on the second pitch! . The route is called Terrible Twos (IX/10) and is named after my nephew who had his second birthday that day. We sent him a little video from the base of the climb.

The second new route we did was during a bad weather day. We went on the hunt for some safe climbing that was safe from avalanches and just as we were heading back to the Lodge, thinking we wouldn’t find anything, I spotted an awesome looking mixed crag that looked like it had some cool features. We walked in and Jeff went for the obvious steep ice line that was the main feature of the crag. Thankfully he found some rock protection as well as screws, because the ice was very thin and fragile, as well as totally soaking wet. Nonetheless it was an awesome climb and we were stoked to get something out of the day. I think he opted for the name La Tournée du Poltron and roughly WI5+, 40m.

The next day we returned to the same location as the weather had deteriorated even more and the avalanche risk was super high! I wanted to try the very enticing, yet crazy-looking line to the left of Jeff’s route from the previous day. This had some very thin ice smears up the steep wall with some technical moves going from smear to smear. It then went through the steep bulge to reach the big roof. Poor gear at the back of the roof was all I could find before pulling out and delicately dancing my way up the hanging chandeliery ice above. It was then a matter of keeping a strong head as I moved further and further into the danger zone. Eventually I pulled over the top and onto easy ground, and it was an amazing feeling to succeed on such an inhospitable line up the face. I went for the Scottish grade again of X,9/WI6 and called it Taking it Home as it felt like I needed to go into Scottish Mixed mode to bag this one.

The fourth new line was once we had relocated to the area surrounding Tennevoll. We spotted a hanging dagger high up that led to an obvious mixed corner. The day we did this route it was another crazy snowy approach and it was dumping all day! We had to be very careful on the approach and opted for the safe but time consuming wade through the trees and the roped up to reach the bottom of the line. You can never be too careful when the conditions are like that! The route itself was super fun. Never crazy hard, but the climbing was so good! It was three pitches long with the second and third pitches being really fun. Cool ice features in the second pitch led to some steep and thin mixed climbing to reach the higher ice. Well-protected and an all round good day! Nevada Ice M5, WI4. 120m, named after the vibrant red rock.

The last new route of the trip was up there as one of the best. It was an abandoned local project that we had been given permission to try. Jeff put on an amazing show whilst dispatching the first crazy pitch. It went through two large roofs, was solely on trad gear, thin ice and fully unknown terrain! That man can climb! The next two pitches were less intense, but no give away either. I topped out on the last amazing ice pitch as the sun was setting and the light turning golden. I can’t think of a better way to end an amazing day and our trip to Norway. ;-) To The Right Of God is graded IX,9/WI5 100m and gets its name from the fact that two routes to the left are Guy Lacelle lines!

I love climbing with Jeff, we always get loads done and it’s really good to know your partner is capable of climbing pretty much anything we put our efforts into. I don’t like wasting available days whilst on a trip and Jeff feels the same way. It’s really cool to climb with someone who is fit enough and psyched to climb everyday of a two week trip, only to rest if conditions or weather decide! I look forward to doing many more cool trips like this one in the future!