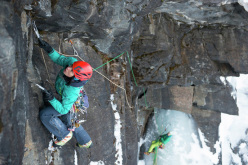 Ines Papert during the first ascent of Finnmannen (M9+ WI7, 400m) together with Bent Vidar Eilertsen on the island of Senja, Norway
Photo by visualimpact.ch | Thomas Senf 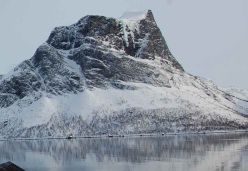 The island of Senja in Norway with the routes Finnkona WI6 on the left and, on the right, Finnmannen (M9+ WI7, 400m Ines Papert, Bent Vidar Eilertsen 02/2013)
Photo by archivio Papert

On Norways' Senja island Ines Papert has made the first ascent of Finnmannen (M9+ WI7, 400m) together with Bent Vidar Eilertsen.

A trip to Norway is a must for any self-respecting ice climber and after visiting the Romsdalen region last year, this season Ines Papert decided to travel even further north, namely 350km above the polar circle to Senja, Norway's second-largest island. Papert made the journey together with Thomas Senf, Nina and Christian Schlesener to find out more about the island's untapped potential and, in particular, to climb a stunning 400m mixed line she had seen on a photo to the right of the classic WI6 ice climb Finnkona.

Papert teamed up with local Bent Vidar Eilertsen and after kayaking towards the base, the pair proceeded on their first attempt at forging a direct line which proved impossible due to the lack of holds. A tricky 20m rightwards slab traverse was the answer but after running out of gear at the end of this, they decided to retreat. The duo returned the next day and managed to climb the entire line in an impressive 19-hour push, with Papert leading all the pitches past difficulties up to M9+ WI7.

The route is protected with trad gear and a handful of pegs only and while Eilertsen commented that their Finnmannen "is a route for real men", Papert explained "it's a pretty serious outing, in particular the finish which involved a 10m runout. Falling from this point would certainly have been not that great."

The team made the most of their 10-day stay to climb a series of other routes nearby which include the first ascent of Aurorabuttress M7/WI6+ 250m (Ines Papert, Thomas Senf) and a repeat of Great Corner M7+ 300m (Christian Schlesener, Thomas Senf).