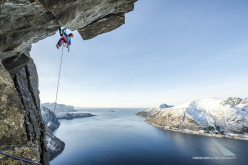 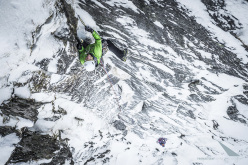 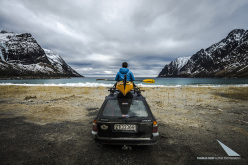 Inspired by her 2013 ice climbing trip to Senja Island in Norway, in mid-February Germany's Ines Papert packed her bags together with Austria alpinist Rudi Hauser and Swiss photographer Thomas Senf and travelled up north once again.

The main aim of the trip was to attempt a direct line up Finnmannen, a peak she had climbed together with Bent Vidar Eilertsen last year via their Finnmannen route, but this year's trip almost grounded to a halt upon arrival at Tromsø: driving rain, lost luggage and no car to be hired. In the end the option "Rent a wreck" proved successful and the trio continued on to their base, the Senjalodge, where they were greeted warmly by Bent Eilertsen once again.

Wasting no time the trio paddled across the bay in their sea kayaks and returned to the base of Finnmannen. Last year's route avoids the obvious series of roofs by climbing to the right before finishing up the slender drip of ice and Papert's intention was to forge a direct line through the main difficulties. "We discovered a thin line of cracks that ran through all the roofs and started up these. The four pitches proved really testing and we were forced to use all the aid climbing tricks in the book" explained Papert, adding "unfortunately though we had to acknowledge the fact that due to the poor pro and the surprisingly bad rock there was no way we could free climb it. Perhaps things would have been different had we used bolts, but we stayed true to Senja tradition and climbed the route with trad gear and pegs only." The climbers breached sections of A2+ aid before reaching the summit and then paddled back across the Fjord "with a smile and a tear. We'd completed our new route but there was absolutely no hope of a free ascent. What a monster..." concluded Papert. The route is named Finnmonster and graded A2+, WI6 400m.

Not to be outdone though the trio remained on Senja Island to establish a further two routes. Papert and Hauser first set their sights on the stunning, virgin north face of Roalden and climbed this via a route that offered surprising conditions, similar to those found in Scotland. "We were grateful for every inch of frozen turf we stumbled across" recalls Papert and while eagles flew majestically overhead the name was easily found: Eagles Paradise 8/IIIV WI5 500m.

With time running out Papert and Thomas Senf then headed to Breitinden, at 1000m the island's highest mountain and, acting on information given to them by Twid Turner, Rich Cross and Bent Eilertsen, they opted for a line up the righthand side of the face. This had been previously attempted by the British climbers but difficult conditions had forced them to abandon their attempt circa 100m below the summit, where the initial WI4 ice gully gave way to overhanging rock and tricky pro. Knowing which exit not to take thanks to the British info, Papert left the crux pitch before Senf dug his way through the snow-filled chimney up the final pitch to the summit. Crazy Maze checks in at 8+/IX WI4+ 600m.