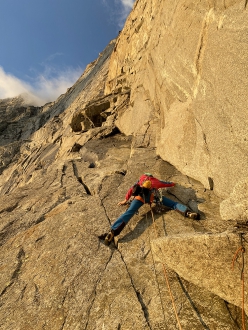 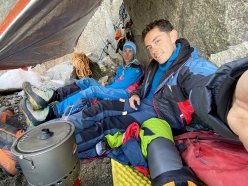 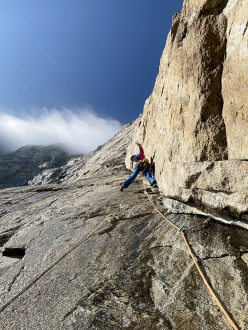 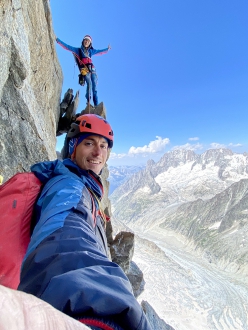 Italian alpinist Federica Mingolla reports about her repeat with Leonardo Gheza of Manitua, the difficult route first ascended solo by Slavko Svetičič in 1991 on the north face of the Grandes Jorasses in the Mont Blanc massif.

Not even a fortnight after repeating Incroyable on Pilier Rouge du Brouillard, Federica Mingolla and Leo Gheza are back at again with another important ascent in the Mont Blanc massif, namely a repeat of Manitua on the north face of the Grandes Jorasses. Established solo by the extremely bold and talented Slovenian mountaineer Slavko Svetičič from 7 to 9 July 1991 in 31 hours, past difficulties up to VII+, A3+, 70°, the 1200m high route tackles a line to the right of the famous No Siesta on the exposed Croz Spur. This imposing shield provides the best rock the mountain has to offer. This is precisely why Mingolla, after having traversed the Grandes Jorasses via the Rochefort ridge two years ago with Lorenzo Pernigotti, chose this line as her first route up the legendary north face, combining it with the last pitch of Le Nez which was established in 2005 by Mauro Bubu Bole and Mario Cortese. Here is her report about the route which has, give or take a few, twenty ascents in total.

MANITUA ON GRANDES JORASSES
by Federica Mingolla
North: a single word that triggers many different emotions. The first things that come to mind are cold temperatures, choss, rockfall and of course the legendary stories of all those who have fought between life and death on these inhospitable walls.

When I began to consider climbing the North Face of the Grandes Jorasses my idea was obviously far removed from the typical image of a mountaineer armed with ice axes and crampons, venturing up icy couloirs and snowy slopes. I knew that I wanted to climb a rock route, possibly with sustained difficulties. And my wish came true when I stumbled across the Manitua route description.

The route follows a logical line of cracks and corners up through the shield, the only portion of good quality rock slap bang in the middle of the huge north face. 350 meters of almost perfect climbing (the last pitch was completely wet due to the snowfield above) that connect two slightly more broken sections of the face; although these have a more alpine feel to them, they are nevertheless almost never covereed in snow. In fact, we managed to hardly use our crampons at all!

So that's why Leo Gheza and I embarked on this new journey, with no expectations and only a great thirst for adventure. We’d already climbed together on Le Incroyable a few weeks back, and on Thursday morning we took the first train from Chamonix to reach the Mer de Glace at around 9:30 am. At 12:30 we stood below the base of the wall, after having walked for three hours across what was once a beautiful glacier and now unfortunately resembles a "Sea of ​​Stones".

We quickly gained height, climbing up the 450-meter pedestal that leads to the bottom of the shield: despite the warm temperatures there was no rockfall, which reassured us a lot and allowed us to proceed without too much haste and enjoy the climbing (despite the rock not being the best) to the proper start of route.

At 17:00 we reached a ledge, precisely above the first pitch on the shield, ready to prepare the bivy. So far everything had gone too well, even the bivouac looked comfortable, I felt good and my partner seemed so at ease in this alpine environment that spirits were high fow a succesful outcome. At 22:00 though all hell broke loose and what was a small ledge practically free of snow suddenly transformed into a pool full of hail.

Fortunately, the thermal sheet that we had previously placed above our heads stopped us from getting drenched, but we sadly had to abandon the sleep we’d been hoping for as the thunder roaring through the black sky made us completely forget the warmth of our sleeping bags that, only a few minutes earlier, had cuddled our dreams.

The alarm went off at 4:30am and we decide to postpone getting up: the wall was still soaked after the storm. At 7:00am, singing along to Manu Chao, we started climbing the shield, hauling our rucksacks and therefore moving rapidly and enjoying one pitch after the next, despite many of them still being very wet.

At 13:30 we reached the last pitch, ie the 7c of Le Nez (the original pitch of Manitua is an old aid pitch while Le Nez also has 3 bolts and is nowadays the preferred line of ascent). Unfortunately we stood no chance: water streamed down the face and the thought of climbing it free didn't even cross out minds. After some difficulties - aid climbing isn’t really my forte - we reached the top of the shield, a mere 350 meters below the summit.

The last section of Pointe Croz is a mix of rotten rock and slightly less rotten rock that leads not without difficulty upwards; simul-climbing across class V terrain seemed more dangerous that an 8a on pegs! So if anyone were to ask me which was the most difficult part of the route, I would definitely answer the last 200 meters. There was no certainty whatsoever, only doubts about which rock to carefully pull on.

A small route finding mistake resulted us in wasting 2 hours, and at 18:30 we reached the summit of Pointe Croz; we were happy and, since we weren’t in a rush, we took some photos of our Cumbre!

The descent from the Croz is the worst nightmare for those who, like me, aren't keen on loose rocks and unprotected terrain. It's one of those situations where all you can do is ignore that you’re in a horrible rubble gully and continue down as best you can to reach the snow, exchanging words with Leo every now and then to make things seem a bit easier. Once on the glacier the descent was decidedly more relaxed, even the rocky section that needed to be downclimbed felt like heaven compared to the choss above.

We staggered into the Boccalatte hut at 23:00, more sleepy than hungry to be honese, but we still managed to devour the soup that Franco Perlotto cooked for us on our arrival. He’s an ace hut warden, one of yesteryear, who looks after us mountaineers even in the early hours of the night; I'd like to take this opportunity to thank those who, like him, do their job with passion and dedication.

We lay down in our beds after midnight, I was happy and I still felt alive inside, as if the fatigue had not yet set in. I almost found it hard to fall asleep after all that excitement.

The next day, while descending down into Val Ferret, the started talking about new projects and my mind started to wander once again. The North Face of the Grandes Jorasses is now a part of me and climbing it was certainly a mental breakthrough. Who knows what the future holds in store.

Thanks as always Leo for the great climb but above all for being so much fun.