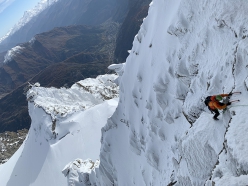 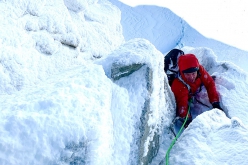 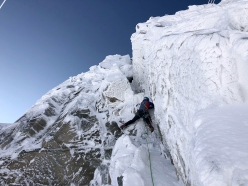 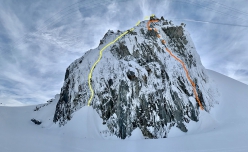 Finally the new mixed season has begun in the Mont Blanc massif! Thanks to the evolution of climbing techniques, new frontiers have continually been sought for the last 15 years, in particular on walls that can’t be climbed almost all year round due to the poor rock quality, and that suddenly become stable when gripped in cold and plastered in snow. One such example is Grand Flambeau, where last spring I established three mixed climbs: Koala Pirla, La Vie in Rosa and Gaietta.

The ice on these mixed routes is slender, and in many respects climbs like these are the normal evolution of ice filled gullies. These "modern mixed" routes can be climbed on faces and in periods when climbing would otherwise be impossible! In order to climb them you obviously need to chose the right moment and right conditions, searching for a line on the internet won’t suffice, you need to have in-depth knowledge, know the area and the prevailing conditions, imagine what is possible and then wait patiently for the right moment which might only be a few days or weeks a year. This is what great climbers before us called alpine culture!

Up here on Grand Flambeau, a stone's throw from Rifugio Torino, I’ve decided to add as many routes as possible, equipping them as best as I can while still leaving some spice. This in order to create a sector that is close by, at altitude, with a really fast approach, that can be climbed even when the weather is bad!

This is how Cuori di Ghiaccio came into being, Ice Hearts, named after the famous Italian Facebook group and its members, run by legendary Monia Gaibotti. Not for profit, but out of passion. In addition to the aforementioned Koala Pirla, La Vie in Rosa and Gaietta, I recently took advantage of the first cold spell and the strong southeast winds that, along with the precipitation, created some very Scottish conditions up there. Cuori di ghiaccio was established with Sergio Fiorenzano, Monia mena with Alberto Corbella. Five new mixed climbs on Grand Flambeau. For the moment…