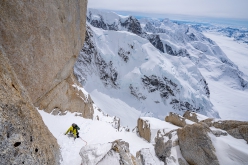 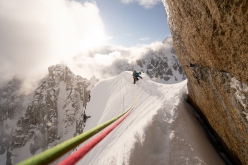 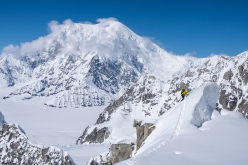 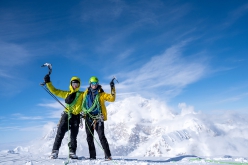 From May 13 to May 16, 37-year-old Clint Helander from Anchorage and 25-year-old August Franzen from Valdez made the first ascent of Mount Hunter’s West Buttress, a distinct feature situated between the ultra-classic West Ridge and the Southwest Ridge. The feature had been attempted by Dave Wills and Dan Donovan in 2000 and scoped by Jeff Benowitz and his partner. Wills and Donovan climbed to half height on the buttress before a storm turned them around. In talking with pilot Paul Roderick and Mark Westman, both agreed that the serac guarding the buttress had retreated and melted back significantly in the last decade.

Helander first noticed the unclimbed feature in 2016. He had previously summited Hunter twice, via the West Ridge in 2011 and the Bibler/Klewin in 2013. Helander recruited the young Franzen, who had also climbed to the Cornice Bivy on the Moonflower. The pair first attempted the route in 2021, choosing to make a base camp at the base of the Ramen Icefall, four miles away from the popular Kahiltna base camp on the southeast fork of the Kahiltna. First, they had to solve the labyrinth maze of the broken Ramen Icefall. While skiing in for their attempt, Helander took a 25-foot crevasse fall at the very beginning of the icefall. Helander extracted himself and was unhurt, but shaken. After climbing for 19 hours a storm moved in and forced them to bivy, and they retreated the next morning.

They returned in 2022 and immediately set to work on finding the path through the Ramen Icefall, now all too aware of the hazards. A pair of skiers from Colorado were planning to ski the Ramen Couloir and had already made one attempt to solve the Icefall. The teams joined forces and soon found a safe way though, this year without any big crevasse falls.

Six days of unsettled weather kept Helander and Franzen hunkered in Denali base camp. Finally, on Friday, May 13, they left in unsettled weather, aware that a high pressure system was about to arrive. They carried heavy loads through the icefall and cached their skis at the base of the ridge. Two pitches of climbing up to AI4 deposited them on the rocky, corniced ridge, where they knew a spacious bivy ledge awaited.

In the morning, they awoke to clear skies and blasted up the ridge to the buttress. They quickly reached their previous highpoint. The first pitch contained several small roofs and a left trending crack system with Helander’s crampons skittering over snow covered slabs. Franzen took the second pitch and deviated from his 2021 route, finding a slightly easier, but still challenging variation to the left. Helander lead pitch three (Won’t Back Down Bulge, M7) past the team’s original high point. On the fourth pitch, Franzen took a lead fall onto the anchor, easily assigning it as the Free Fallin’ pitch. Helander took a fifth pitch up a decreasing angled snow slab to an amazing bivy. That night, a full moon illuminated the sky, providing them with the inspiration to later name the route Full Moon Fever.

Three more long and technical pitches the next morning brought the team to the top of the buttress at 11,000’. Winds picked up on the lower plateau as the team tiredly slogged toward the south summit. At this point, they had decided to try to link up all three summits, something that has only been done a few times previously (notably Jon Waterman in 1978 and Tom Choate, Dave Johnston and Vin Hoeman on the second ascent of the west ridge). They camped beneath the south summit, just out of the wind and dried their soaked bags in the midnight sun. In the morning, they awoke at 5am and rehydrated before departing with all their gear for the south summit at 8:30.

Difficult snow conditions beat the pair down as they broke trail through wind board at 13,000’. By 6pm, they stood on top of the north summit, the tallest of Hunter’s three summits. They had successfully stood on all three summits.

Westman believes no one has stood on top of the south summit since he and his partner climbed the south ridge in 2003. Helander and Franzen descended the west ridge to the Ramen Couloir, reaching the base in just 3 hours and 10 minutes. Then, they had to cross the glacier and retrieve their skis. After a warm meal and lots of procrastinating, they skied away at midnight toward the Ramen Icefall and the lower Kahiltna Glacier. Five hours of hallucinating and painful travel later, they arrived at base camp at 5am after 24 hours on the go, then flew out a few hours later and celebrated at the Fairview Bar.