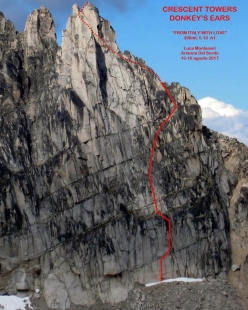 From 15 - 16 August 2017 the XMountain Mountain Guide Luca Montanari and Arianna Del Sordo made the first ascent of 'From Italy with love', a trad climb up the Crescent Towers in the heart of the Bugaboo Spires, Canada.

Climbing in the Bugaboos, in the Bugaboo Provincial Park right in the the heart of British Columbia, means measuring yourself against the immense granite walls and spectacular towers and pinnacles, in a rugged and isolated environment which in many respects resembles the European Alps.

During our stay we managed not only to repeat some beautiful climbs, but we also succeeded in leaving our mark by climbing a new route. While repeating a route on the Crescent Towers I noticed a nearby line up to the summit of Donkey’s Ears.

We were immediately taken in by the idea of climbing something new and so on 15 and 16 August we established From Italy with love, a 300 meter outing with a decidedly difficult start followed by a significantly easier finish.

22.06.2014
Dreams, the video by Tad McCrea
The video of Tad McCrea's last year of climbing in the mountains throughout the Western Hemisphere.