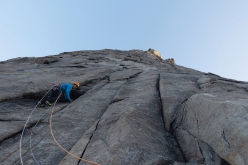 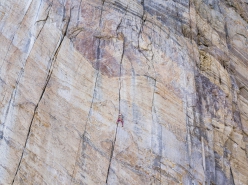 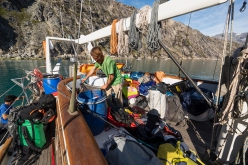 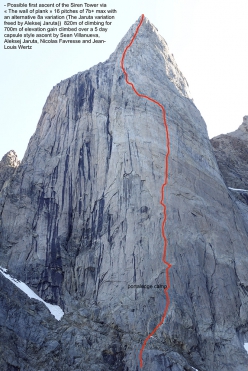 The final report by Nicolas Favresse who this summer with Sean Villanueva O'Driscoll, Jean-Louis Wertz and Aleksej Jaruta, climbed a series of new routes in the Kangertigtivatsiaq Fjord area of Eastern Greenland

We made it safely back from Greenland almost 3 weeks ago already! The transition from living for 3 months completely disconnected to a world at full speed has been tough, but we are slowly acclimatising back to technology!

Anyway, the Atlantic crossing was as tough as expected. We managed to get across making intermediate stops in Iceland, Scotland and Ireland in order to avoid getting caught in mean storms. Even so we did see huge waves and shared several dishes with the fishes along the way. After such a long time at sea, the feeling of getting back on a solid ground where you can run and pee on a tree feels fantastic!

Although the sailing to Greenland and back was long and petty uncomfortable, it did add a nice spice to our adventure and helped us have an appreciative mindset and contributed to having a creative mind.

During the 3-month climbing expedition we sailed for about 45 days and spent 45 days on land. We managed to open 8 new routes and test the acoustics of 7 big walls in the area of Kangertitivatsiaq Fjord.   After climbing 4 routes in the Mythics Cirque we used inflatable kayaks to access other big walls deeper in the Fjord. The Kangertitivatsiaq Fjord area is incredibly beautiful and wild and hosts what seems to be infinite big wall climbing possibilities. We used no bolts nor piton during the whole expedition. But we did use chalk and underwear!

All the best!
Nico Favresse

26.08.2021
Greenland Siren Tower, report #1 by Favresse, Villanueva, Wertz, Jaruta
Belgian climbers Nicolas Favresse, Sean Villanueva, Jean-Louis Wertz are currently climbing in Greenland with Aleksej Jaruta from Sweden. After having reached the island by sailing boat from France, the team managed to establish the first route up the steep Siren Tower.

23.07.2014
Greenland 2014: updates from Nicolas Favresse & Co
Nicolas and Olivier Favresse, Ben Ditto and Sean Villanueva report about their first climbs and the start to their Greenland & Baffin Island expedition.

09.09.2010
Favresse, Villanueva and Ditto, final routes in Greenland
Nico Favresse, his brother Olivier, Sean Villanueva and Ben Ditto are now sailing home after a final flurry up the granite walls of Greenland.

07.07.2010
Greenland 2010, two new routes for Favresse, Villanueva and Ditto
On the Red Wall in Greenland Nicolas Favresse and Ben Ditto carried out the first ascent of Seagull’s garden, while Olivier Favresse and Sean Villanueva established the nearby Red chili cracker.