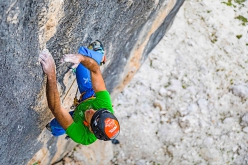 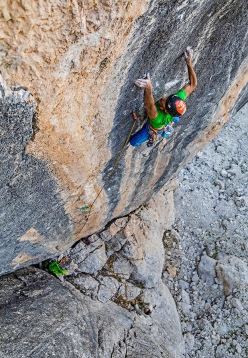 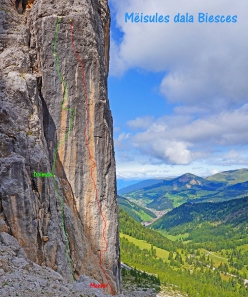 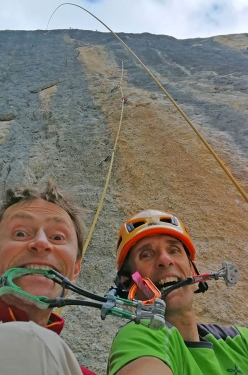 Dolmen is a semi-trad climb which I first ascended in 2017 to the left of the famous Menhir. After repeating Menhir I glanced to the left and noticed there was room for another quality line.

Knowing the "Gardenesi", the Val Gardena locals and their repulsion for bolts in this part of Meisules dla Biesces I forewarned them and… decided to try and establish the route ground-up in my usual style: trad to the max and bolts only as a last resort. And so in 2017, belayed by my son Alessandro, I managed to make the first ascent.

Basically it’s a second pitch about half the height as Menhir. It starts from a small ledge that is reached via an easy grade IV and V crack that needs protecting with trad gear. You belay on a spike and right away there’s a ring bolt, which backs up the belay and is used for the descent.

From there the route proper begins, first with a Friend, then a thread which protects the first runout section that leads to a bolt. This protects a second runout and the crux, 7c obligatory climbing past small crimps. From here some laybacking and pockets lead past another 4 Friends, and after two further threads you reach the last Friend and another bolt, the third, which I placed only to indicate the independent belay and avoid that repeaters all dive towards the Menhir bolt.

I tried it a couple of times in 2017 and even took some pictures, when the moment came for the send the weather changed abruptly and I had to put things off until summer 2018. Last year though my elbow gave me problems and crimping those tiny holds was out of the question, hence I postponed things to this summer. Unexpectedly, after checking our the moves carefully, I sent it pinkpoint and then, on a high, led it again in perfect style.

The route is 25m long and I suggest 8a grade with mandatory 7c climbing. As to the route quality I’d give it 5 stars, those who know Menhir know what I mean! Here’s the gear in the correct order: purple Totem, blue Totem, blue Camalot, yellow Camalot, red Totem, purple Totem.

I’d like to thank Matteo Pavana for the beautiful photos and Alessandro Larcher, Tiziano Buccella and Nicola Sartori for the patient belaying.