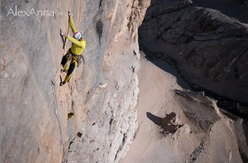 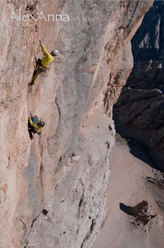 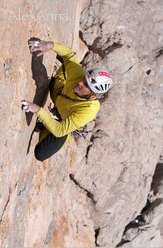 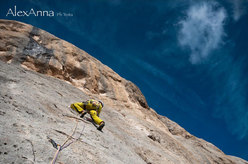 On 14/07/2010 Rolando Larcher and climbing partner Tiziano Buccella carried out the first free ascent of AlexAnna (740m, 8a+ max, 7a+ obl.), up the Pilastro Lindo on the SW Face of Punta Penia on the Marmolada, Dolomites. Larcher had established the line with various partners over 6 days during 2007 and 2008.

AlexAnna... lets start with a short summary of this route wedged between the splendid Larcher-Vigiani (another Larcher creation established with Roberto Vigiani in 2000) and the classic Soldà, with which it shares the first three pitches. The setting is the fabulous Punta Penia up the first-class South Face of the Marmolada. 740m in total, for 17 pitches of absolute "void" which necessitated 6 days of climbing for Rolando Larcher & partners, spread out over two years: 4 in 2007 and 2 in 2008. The maximum difficulties touch upon 8a+ with an estimated 7b obligatory grade during the first ascent which, after the redpoint, settled in at 7a+. The style of ascent, stated right from the outset, is an important detail: established from the ground-up, always on lead, with the focus on limiting the number of bolts in favour of as much trad gear as possible. In the end only eleven 8mm bolts were placed by hand. The result: a route defined as being "an incredible and miraculous theory of handholds and footholds..." That was back in 2008, yet the project was incomplete without the first free ascent... which came about on 14 July 2010. For Larcher this ascent marks the end of another fine chapter. It's also a sign of an direction and challenge which continue to evolve and which never end - so much so that Larcher is currently on some rock face in Turkey with his colleague Luca Giupponi. One thing is a constant: history and research - in climbing too - continue to evolve. At times resulting in beautiful and difficult routes such as AlexAnna. To believe it, experience the void and feel its attraction. Or immerse yourself into the impressive photos taken by Giampaolo Calzà...


18.30 on 14 July, after 12 hours spent on the rock face we finally reached the summit cross on Punta Penia. Excited and euphoric I hugged Tiziano and thanked him for having accompanied me, for having supported and endured this long day of toil and joy. I relived emotions I'd experienced 9 years ago on the Larcher-Vigiani, on the very same rock face and summit, with another prestigious redpoint in the bag. This time though I didn't share the responsibility with Roberto, while my harness was heavy with much more gear...

With today's free ascent I finally finished off my AlexAnna project. I'd begun in 2007 and during the successive summer I reached the summit but didn't have the time to go for the redpoint. I postponed things to 2009, but realising the dream of an expedition to Pakistan used up much of the already short summer and once back in Italy, my arms weren't sufficiently strong. So I had to remain patient for another year, spent training hard, motivated more than ever before for this project, yet at the same time worried that some niggling injury might put an end to it all. I'm no longer a spring chicken and the route was going to require the best of me.

Just like in life itself, to reach a goal in climbing it isn't enough to simply be motivated and on form. You also need the most important thing of all: luck. Or, as my uncle - a priest - calls it, divine providence (these are, unsurprisingly, the names of two important routes). I'd programmed the entire summer totally around this climb, thinking that I'd have to invest a great number of days to succeed. But fortune, unexpectedly, revealed her magnanimous nature, combining one of my best climbing forms ever with a period of unseen high pressure. Zero degrees at 5000m! And so, much to my amazement, I succeeded in just two attempts.

On 4 July, accompanied by Tiziano Buccella, in a victorious day I re-climbed all the sequences and checked out the pro needed up to the 14th pitch, and already managed the crux pitch second go. Then cramps and tiredness set in and we abseiled off. The crux section was less severe than I had remembered, perhaps my form or the pleasant warmth, unusual for these altitudes, helped things a touch. As soon as I had recovered I was roaring to go, the weather remained stable but I was blocked by unpostponable appointments. Frustration grew and I feared losing the fleeting moment.

On 14 July I was ready for action once again: I didn't have any work commitments, no other constraints, the weather was still perfect and I had a trusted climbing partner, Tiziano. At 04:30 we set off from Rifugio Contrin, walked up Val Rosalia and at 06:30 we started simul-climbing up the first three pitches of Via Soldà which brought us to the base of the Cristina pillar and the start of the new route. We reached the ledge by mid-morning. I'd been climbing fluidly and I was optimistic, eventhough the real difficulties still lay ahead of us. I sent the 11th pitch straight off, I now had a real hope of going home with the redpoint in the bag. I changed shoes, put on those which are more precise and started up the next pitch. Tension was palpable but I didn't make a single mistake and, albeit a bit stiff, I managed to reach the belay. I exulted, but not too much, because the road to the summit was still a long one and I needed to remain concentrated. The next pitch is the second hardest, I had enough energy and I controlled it well. The 13th pitch is easier, all you need to do is remain calm and place the pro as best possible.

Now all that was missing were the two nasty pitches up the headwall that lead through the final overhang to reach the finishing slabs. I'd checked the first one but not the second, I hoped I'd remember the moves from 2008. The first is a mean and delicate traverse where you really need to be able to climb, brute strength means nothing here. Luckily I escaped unharmed on the "eggshells" and I grasped the belay. I remembered the next pitch, the 15th, as being physical. Thankfully I still felt strong and I set off upwards, dreaming of the exit slabs. As usual though memories played a nasty trick and the pitch got me cussing. I reached a point where I needed to protect myself with a Friend, the peg was far below me but I was to tired to place the pro. Inexorably I'd become pumped, but should I fall or turn back I wouldn't have had the strength for another attempt. I simply had to push on! I climbed desperately, searching for holds with failing hands and, giving it all I had, I managed to drag myself up to a small niche. Blue in the face I improvised a precarious jam and caught my breath. With the returning oxygen I slowly became more lucid, finally placed a Friend and realised that I'd done it.

I reached the belay before shouting out and when Tiziano joined me we shared all my joy. Two easy pitches separated us from the summit, a pure formality. I'll remember them forever as being the most beautiful, not because of their undeniable beauty, but for the lightness and serene state of mind with which I climbed them. A magic which can only stem from the knowledge of having achieved something.

The idea behind this route took form in 2007, from the desire to climb up the same rock face but using a different set of cards. I wanted to use a style as similar to trad as possible, all on lead, to to test myself and evaluate the best style for free climbing up a demanding rock face. I'd already written my put my thoughts to paper in my report, published recently on PM, after the route Camaleontica, first ascended with Maurizio Oviglia in Sardinia.

I finished AlexAnna in 2008 and I was helped greatly, both technically and mentally, by the fantastic experience I'd had in May in Wales during the international trad meeting organised by the BMC. During the first ascent of AlexAnna I managed to on-sight up to the ledge, above this I needed to resort to some rests to overcome the difficulties, to place the pro and to clean some sections. For the record, during the redpoint on the 8a+ traverse beneath the roof I climbed with in-situ pro. I need to thank all the partners who belayed me and shared the cold rock face: Michele Cagol, Michele Paissan, Francesco Mich, "Pedro" Roberto Pedrotti and Tiziano Buccella. I'd also like to thgank Andrea De Bertol and his father Giorgio, the wardens of Rifugio Contrin for their support and, last but not least, "Trota" Paolo Calzà for the magnificent photos.

AlexAnna is an acronym of the names of my children, Alessandro my elder son and Anna, born while I was half-way through creating the route. It's dedicated to them, because it's one of my most beautiful lines and, like them, it required the best of me.

Thanks to: La Sportiva, Montura, Petzl