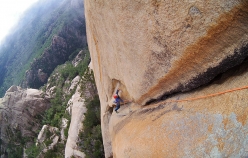 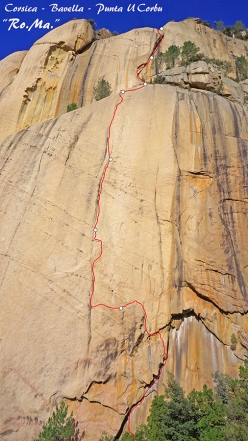 On the 'most beautiful and famous big wall in Corsica', i.e. Punta U Corbu at Col de Bavella, Rolando Larcher and Maurizio Oviglia have completed their 'Ro-Ma Project’ to create the new multi-pitch rock climb Ro.Ma. (180m, 7c max, 7a+ obl). Oviglia provides the details.

After another five days of hard work, my friend Rolando Larcher and I have finally completed and freed our project up Bavella's granite walls in Corsica we’d begun in 2010. In 2012 we returned to add some more pitches, in 2013 Fabio Erriu and I continued it to the high ledge to give it a provisional finish, but two obvious and logical pitches remained to be climbed the headwall above as did first free ascent. Unfortunately these final pitches are often wet, but this autumn I managed to motivate Rolando once again for this this project and we returned, hoping to find it dry.

Although the very last pitch was slightly wet, we still managed to reach the summit slabs. The new climb tackles an extremely pure line up splitter cracks straight through the mirror-like granite slab, up the most beautiful and famous big wall in Corsica. At the end of the day the climb isn’t extreme by any means (up to 7c) but nevertheless it’s a fairly demanding outing that requires both good trad climbing skills and good sports climbing fitness applied to granite cracks.

Although we managed to free the route, Ro.Ma.’s final chapter is still unwritten. There’s one small section that Rolando failed to free, two moves and a hand-swap in a tiny finger crack… We agreed to establish a belay at that point, despite having originally placed the belay 6 or 6 meters lower during our ground-up first ascent. We opted for this ploy not because we wanted to "cheat", but instead because we wanted to render the climbing difficulties as similar as possible (this bouldery crux is far harder than the rest of the route), and free the route ourselves in this version. In order to be as honest and transparent as possible we’ve left the original belay, so that those who wish to climb the pitch without this new belay can try do so…

The "RoMa" project came about as a result of what I "envisaged" in 2006 while repeating Acqua in Bocca at Teghie Lisce but which then, as things turned out, proved to be somewhat futuristic. On my first trip to Bavella with Rolando in 2010 I managed to convince him to try this project by saying that it was an absolutely amazing line and so we climbed on top of Teghie Smooth and carefully observed the face through our binoculars: in the end we discarded the line I originally had in mind (this was later bolted from above by the French - amongst others some superstars such as Petit and Millet - at present none of the pitches have been freed and are estimated somewhere in the region of 9a+! In short, another route that’ll wait for Adam Ondra to come along).

Through our binoculars we identified two more lines up this granite mirror that soon became De Rerum Natura (2010) and now RoMa. As we descended from De Rerum, anxious of loosing out on this opportunity, we immediately climbed the first pitch of RoMa. At the time Rolando wrote the word RoMa at the base with some chalk - Rolando and Maurizio - and this name stuck until now. Indeed, it was even published as such in the new Bavella climbing guidebook and described as an unfinished project. This anagram, as Rolando states, in the best way to celebrate 18 years of establishing new routes together worldwide. The new route is fantastic and, at the end of the day, it feels considerably more difficult than nearby De Rerum Natura, despite the maximum difficulty and obligatory climbing being the same grade.